Half centuries from captain William Porterfield and all-rounder Kevin O'Brien weren't enough for Ireland as they fell to a 76-run Duckworth/Lewis defeat by Sri Lanka in the first one-day international at Malahide.

Dinesh Chandimal's unbeaten century and a fine all-round display by Dasun Shanaka helped Sri Lanka to vicotry, with Chandimal's innings of exactly 100 from 107 balls the cornerstone of the tourists' innings of 303 for seven.

Ireland were 164 for four when the rain came down, but after three overs were lost they never threatened to reach a revised target of 293 and were bundled out for 216 with 38 balls unused.

Shanaka finished with five for 43, having earlier clubbed a quickfire 42.

Barry McCarthy marked his Ireland debut with two wickets in as many overs to restrict Sri Lanka to 48 for two after the powerplay, but Kusal Mendis led the recovery with a half-century before being caught and bowled by Kevin O'Brien.

Chandimal anchored the innings, hitting just six fours, as Angelo Mathews (49) and Chanaka provided the pyrotechnics, with the latter firing 42 off only 19 balls prior to being bowled by Boyd Rankin.

Between them, Mathews and Chanaka hit nine fours and five sixes - the only maximums in the Sri Lanka innings.

Ireland's reply got off to a strong start, but Shanaka bowled Paul Stirling for 27 after a 53-run opening stand.

The seam-bowling all-rounder then had Ed Joyce and John Anderson caught behind cheaply, and when Porterfield fell to Shaminda Eranga for 73, Ireland had fallen well behind the required rate.

O'Brien hit three sixes in making 64 from 49 balls either side of the rain delay, but he was trapped lbw by Nuwan Pradeep as the last six wickets folded for 18 runs, with Shanaka doing most of the damage.

Porterfield lamented the loss of his own wicket at a time when the chase remained alive, before the rain further disrupted Ireland's efforts.

"I think the big moment was whenever I got out just before the rain break," he said. "I think if I'd still been there going back out it would have made things a lot easier for us.

"We might have been able to get a bit of momentum going then and with wickets in hand it makes things a lot easier coming down the back end.

"But we struggled to get any sort of partnership together after that and losing Stuey (Poynter) and Kev (O'Brien) in quick succession it was hard to get that momentum back."

The captain also conceded his bowlers struggled to sustain pressure duiring the Sri Lanka innings, and called for more discipline ahead of the sides' second match on Saturday.

"The lad (Shanaka) on debut with the five-for has shown us the lengths to hit. Potentially we weren't consistent enough - we bowled some very good balls and some good spells but we could have been a lot more disciplined.

"That's something we need to look at for the next couple of days." 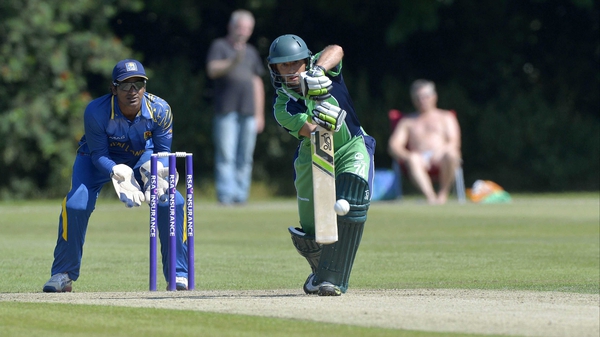