Ireland Women made it two from two in their T20 World Cup Cup Qualifiers in Bangkok on Sunday morning with a hard-fought 28-run win over a gritty China team.

The match marked a 100th cap for Cecilia Joyce - a wonderful achievement for the 32-year old - however it was her twin sister Isobel who drove the Irish girls to their vital win.

Having won the toss and opted to bat first, Ireland weren’t at their fluent best early on and had struggled to reach just 34-4 heading to the halfway point of their innings. Skipper Isobel Joyce proved the Irish saviour just when her team needed it.

She hit three fours in a priceless unbeaten 41 and found good support from Laura Delany (19) as the pair added 40 for the fifth wicket.

A couple of late run-outs slowed progress again at the end of the Irish batting effort and a final total of 104 for 6 looked competitive but not insurmountable.

Ireland needed to start well with the ball and that they did as Lucy O’Reilly and skipper Joyce combined to remove openers Sun Mengyao (4) and Zhou Caiyun (6). Robyn Lewis accounted for Zhao Ning for 7 however China skipper Huang Zhuo was proving a lot more troublesome.

Isobel Joyce (2-11) and O’Reilly (2-18) again bowled brilliantly for Ireland as wickets tumbled at the other end and Huang finally ran out of time in her lone defiance. She was unbeaten on 39  at the end of the 20 overs as the Chinese reply closed on 76 for 7.

It was a relatively comfortable win in the end as the depth and experience of the Irish bowling unit proved too much for China’s batting but there were some anxious moments along the way.

Skipper Joyce was awarded the player-of-the-match award for another excellent day with both bat and ball.

The ladies get a day off on Monday before their third and final group match against Zimbabwe on Tuesday as the competition then enters its crucial stage later in the week.

A win over Zimbabwe would see the Irish avoiding tournament favourites Bangladesh in the semi-finals, with Scotland the likely semi-final opponents.

The African side squeaked past the Netherlands by two runs in a last ball thriller, while in the games in the other group Bangladesh crushed Scotland and PNG hammered hosts Thailand. 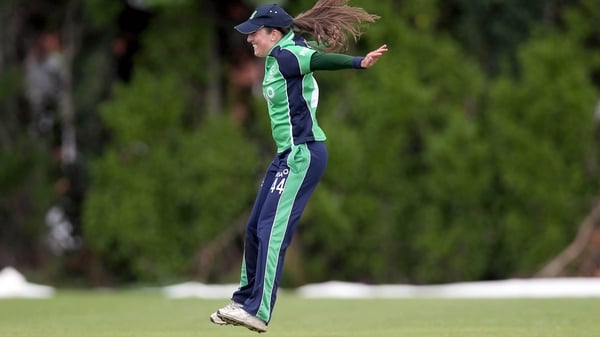