Clare Shillington hit an unbeaten 46 to gain the Player of the Match award as Ireland Women crushed hosts Thailand by 10 wickets to record their second warm-up win in the T20 World Cup Qualifiers in Bangkok.

Shillington - Ireland's most capped player - showed all her experience as she thumped five boundaries in her 39-ball innings, sharing an unbroken opening stand of 75 with Cecelia Joyce as Ireland raced past their modest target of 73 in just 12.5 overs.

Joyce also found the boundary ropes twice in her undefeated 27 from 38 balls, as both batters adjusted well to the sluggish pitch.

Shillington and Joyce both used their feet advancing down the track to the Thailand attack, punishing anything remotely loose.

Earlier, Thailand were restricted to 72 for 7 after opting to bat first. They found runs hard to come by, as a combination of tight bowling backed up by athletic fielding proved hard to penetrate.

Kim Garth (1-8) got an early breakthrough, courtesy of a superb diving catch by wicket-keeper Mary Waldron, and that set the tone for the innings in which the Irish never relinquished their stranglehold on the game.

Leinster all-rounder Laura Delany bowled well claiming 2 for 9, while the spinning triumvirate of Ciara Metcalfe and the Lewis sisters also got among the wickets.

Ireland will certainly face tougher tests than this as they begin the tournament proper on Saturday, when they take on old foes the Netherlands. 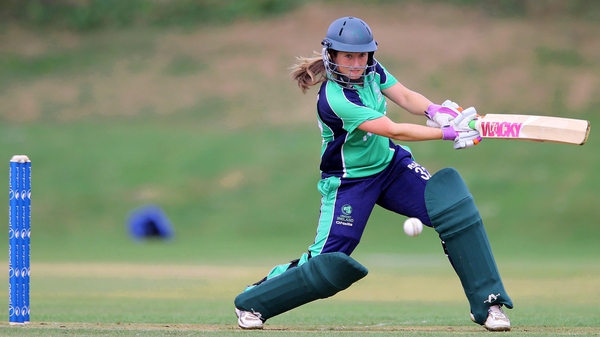