Captain William Porterfield has said Ireland failed to build a platform from which to chase South Africa’s total in their Cricket World Cup loss, but insisted there were positives to be taken from the game.

“They’re obviously a fantastic side; they’ve got a lot of players in the top order, fantastic players. And obviously, coming in hard with the ball as well,” Porterfield said after the game.

“We let ourselves down in a couple of areas, but I thought that, by and large, we stuck at it and kept coming in hard.”

Porterfield identified a couple of incidents that might have changed the course of the game, particularly a missed early catch on Hashim Amla, but said these were part and parcel of the game.

“It’s one of those things in cricket, chances go down, and you have to move on with it and keep sticking to the chance in hand,” he said.

Ireland had felt it possible to chase the South African total of 411 as they approached their innings, Porterfield insisted, but had not managed to establish the platforms from which to do this.

“[McBrine] has been bowling incredibly well for us, and he’s a competitor, he scraps right to the end,” Porterfield said. “The two lads [O’Brien and Dockrell] played very well, especially after being put under some pressure: I think we were about  50-5 when they got together, and that steadied the ship nicely there.

“It just shows you how easily you can get scores, how freely you can still score when you get that partnership together. Unfortunately we didn’t manage to do that within the first four or five to get the platform for those lads for to come in later on.”

Looking ahead to Ireland’s next game, against Zimbabwe, Porterfield said he would take positives from the performance against South Africa, and move on to Hobart where “we’ve got to prepare, and go there and try and get the two points again.” 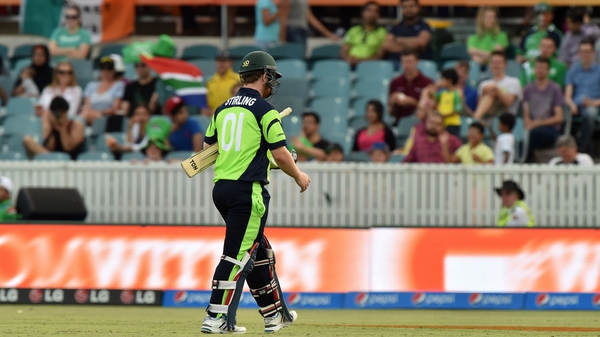