By John Kenny in Brisbane

England’s One Day International cricket captain Eoin Morgan will not lead the side against his native Ireland in their ODI clash in Malahide on Friday 8 May.

The Irishman, who captained England in their last two ODI wins in Dublin, has been bought at auction by the Indian Premier League side Sunrisers Hyderabad along with the likes of Kevin Pieterson and fellow international Ravi Bopara

Morgan has been given clearance by the England and Wales Cricket Board (ECB) to play in the whole of the IPL, which will run from 8 April to 24 May, which means that both he and Bopara wont be in Dublin in May.

A fourth wicket wicket stand of 226 between Morgan and Bopara saw England cruise to a six-wicket victory against Ireland the last time the sides met in Malahide in 2013.

"Yeah, that (signing for the IPL) means I won't go to Ireland," said Morgan.

"The chairman of selectors and the director of cricket have allowed the guys who have got picked up in the IPL, or went into the auction, to miss that Ireland game in order to expose themselves to opportunities in the IPL in order to learn more about their game."

The news will come as a blow to Cricket Ireland, who saw close to 10,000 spectators pack into the purpose-built Malahide Ground two years ago.

However, the absence of the likes of Morgan and Bopara will heighten the chances of an Irish win against an England side that lost to Ireland in dramatic fashion at the 2011 World Cup in India.

Meanwhile, having beaten the West Indies last Monday in their opening game of the 2015 World Cup in New Zealand, the Irish squad travelled to the Australian Gold Coast before heading for Brisbane to prepare for Wednesday’s game against the UAE at the 'Gabba'.

Plans for some rest and relaxation were disrupted somewhat by Cyclone Marcia, which slammed into the north-east coast of Australia, depositing some 500mm of rain in some areas and causing flooding to many regions along the coast.

It meant an early departure for the squad who arrived in Brisbane on Thursday afternoon. 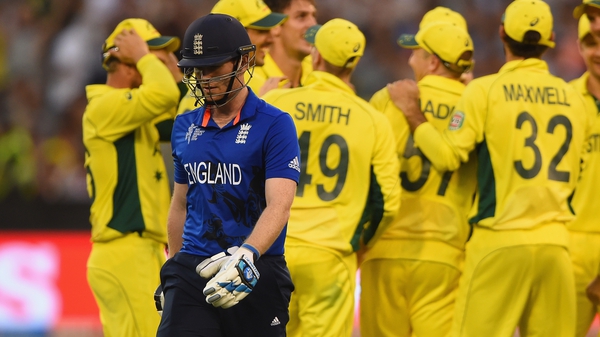