Ireland captain William Porterfield said victory over the West Indies puts his side in "a great position" in the World Cup.

Porterfield's team won their opening Pool B match by four wickets at Nelson, chasing down their opponents' score of 304 for seven with 25 balls to spare.

Paul Stirling (92), Ed Joyce (84) and Niall O'Brien (79 not out) impressed with the bat to put Porterfield in buoyant mood.

He told the post-match press conference: "It's fantastic. The way we went about chasing down those runs was great, it sets us up for the next three games. It's a great position to be in.

"We firmly believe what we are capable of. We've just got to continue this throughout the tournament.

"They obviously had a strong finish but 300 was about a par score. We knew it was a good pitch and a quick outfield. The belief is that we can qualify from the group stage."

"The belief is that we can qualify from the group stage." - William Porterfield

Next up for Ireland is a match against United Arab Emirates in Brisbane on Wednesday 25 February and Porterfield added: "The conditions will be different there but we'll look to keep improving."

Man of the match Stirling said: "It's great to get our first win in the competition. I'm pretty happy.

"I think it was a good toss to win. We got quick early wickets and the pitch got better as the day wore on."

"That was a tough loss," he said. "Marlon Samuels and Darren Sammy put on a very good partnership, we were struggling till they added some impetus.

"We tried to get wickets today but we just didn't get them. I think we need to be a little more precise.

"We're leaking too many runs at the start of the innings. We need to tighten up." 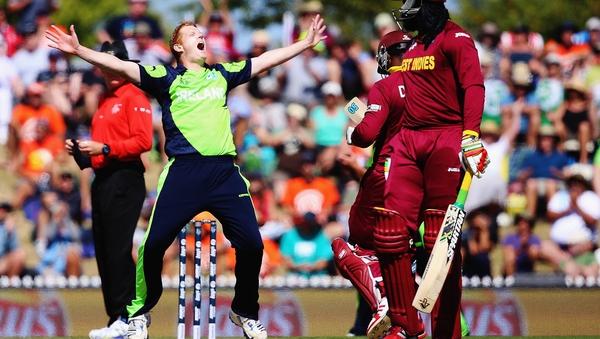 As It Happened: Ireland beat West Indies at World Cup