Eoin Morgan has called on his senior players to lead from the front after England were thumped by Australia in their World Cup opener.

An England team with seven World Cup debutants were outplayed from start to finish as they endured a horror opening night to lose by 111 runs in front of an MCG full house.

Their problems began from the very first over, when centurion Aaron Finch was dropped before he had scored, before Mitchell Marsh's international career-best five for 33 effectively ended the contest early.

Morgan's night was further soured as his miserable run continued with his third successive duck against Australia. The skipper now has just two runs in his past five innings.

But perhaps the Dubliner’s most pressing need is to lift his squad after they were handed a powerful illustration of the gap between them and the tournament favourites.

"Certainly first point of call is to turn to senior players and ask them to lead from the front," Morgan said.

"Every game you want your senior players to lead from the front especially when you play against a side that's been on a bit of a run. Friday will be no different."

England's task gets no easier with the other fancied co-hosts, New Zealand, next up in Wellington on Friday.

Defeat would not be a hammer blow to their first ambition of reaching the quarter-finals and Morgan said his team would quickly bounce back from their Melbourne setback.

"It's not a big challenge. We said our first two games of the tournament would be our toughest in the group," he said.

"To come out of them with results would give us huge confidence. We're still at that stage. We're still focusing on getting to the quarter-finals and building the further we get into the tournament.

"As regards to Friday we'll regroup assess and see what we've done wrong."

Morgan remained defiant over his own troubles too after he was out playing a poor-looking shot for the second successive game.

Asked if he was now concerned by his run, he said: "After that dismissal I don't think so. I toe-ended a pull.

"I'm quite honest with things normally. I'm a nick-off candidate massively. If I was nicking off every ball that I'd got I'd be worried, but I'm not. I'm getting out in different ways.

"Moving forward I'll be trying to spend as much time in the middle as possible."

"Geoffrey tends to be critical 24/7. Certainly people within the team - it falls on deaf ears" - Morgan on Geoffrey Boycott

"Certainly people within the team - it falls on deaf ears."

England could take some positives away from the MCG, however, with James Taylor hitting an unbeaten 98 while Steven Finn claimed a hat-trick from the final three balls of Australia's innings.

He became the first England bowler to achieve the rare feat at a World Cup, although his celebrations were muted after Australia had posted 342 for nine.

England then collapsed to 92 for six in reply before Taylor showed his defiance, and class, as he fell just shy of a maiden ODI century.

"It was outstanding. It was typical James Taylor," Morgan said.

"He got himself in, scored in different areas and managed to take advantage of being in. These are qualities we're looking for - guys who can not only get 60 or 40 but guys who can go on and potentially win a game for us."

Taylor was denied his century in farcical circumstances when James Anderson was incorrectly adjudged to be run out to finish the match.

Taylor had correctly reviewed an lbw decision against him, but umpires Aleem Dar and Kumar Dharmasena then opted to check the replay which showed Anderson had been run out at the other end.

The International Cricket Council's playing control team later said that an error had been made when Anderson was given run out and that the ball should have been declared dead. 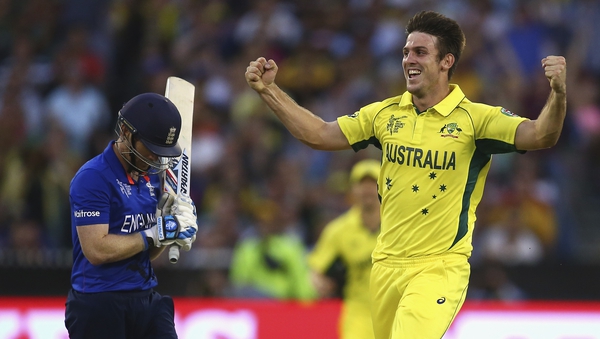