Ireland have won their second World Twenty20 qualifier, defeating UAE by 21 runs on the Duckworth Lewis method after the match was abandoned due to rain and a power failure.

Following on from their dramatic last-ball victory over Zimbabwe on St Patrick's Day, William Porterfield's men restricted the UAE to a paltry 123 for six after winning the toss, with Paul Stirling and Kevin O'Brien each taking two wickets.

The total never looked enough after Porterfield and Ed Joyce put on an 80-run partnership, but Ireland were denied the chance to cross the finish line when the floodlights twice went out at the Sylhet Stadium and with rain following, the match was quickly called to a halt.

With Ireland well ahead of par on 103 for three, they were awarded the points and just need to beat Holland in their final group match to book their spot into the main draw where the likes of England, Sri Lanka and South Africa await.

Having won the toss, Ireland opted to field first but were initially subdued by UAE opening pair Amjad Ali and Faizan Asif before the two were involved in a mix-up in the fifth over and the latter run out by Tim Murtagh.

Amjad cracked four fours in his 20 but his innings ended when he edged to short third man off Stirling, who picked up another wicket three balls later when Swapnil Patil tamely flicked to midwicket.

Shaiman Anwar thumped two sixes as he top-scored with 30 before giving O'Brien a simple caught-and-bowled chance. The UAE's hopes were undermined by their failure to find the boundary on a regular basis.

Indeed, their batsmen only found the rope 11 times in their 20 overs, although Amjad Javed (19) and Rohan Mustafa (13 not out) ran hard to lift their side's total to a little more than a run a ball.

Stirling showed them how it was done in Ireland's reply with two fours in the first over before having to retire hurt in the second over after earlier being struck on the elbow.

Porterfield (33no) and Joyce continued to thrive, however, with the latter thumping Ahmed Raza for a flat six and then a four in the eighth over.

Joyce went for 43 after pulling Sharif Asadullah to midwicket, while O'Brien was dismissed three balls later, with Andrew Poynter falling soon after.

Any hopes of a tense finish were dashed when the floodlights suddenly went off and the game lasted just two balls longer before the power bizarrely went out again.

With rain then hitting the stadium, the game was abandoned and Ireland - well ahead of their Duckworth-Lewis target of 82 - claimed the win.

In the other game in Ireland's qualifying group, Zimbabwe beat the Netherlands by five wickets with a six off the last ball.

Meanwhile, England will start their Twenty20 campaign with more questions than answers after another defeat in their final warm-up match against India.

England started the day positively in the field but were cowed by some destructive Indian batting, Virat Kohli (74 not out) and Suresh Raina (54) playing with precision and power as they carried their side to an imposing 178 for four.

Eoin Morgan managed 16 runs as England finished well off the pace at 158 for six. 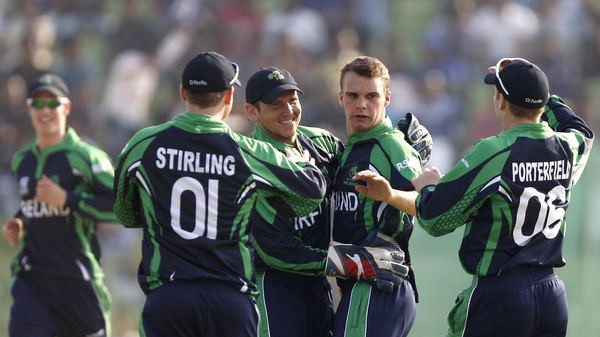