Luke Wright's unbeaten 99 got England's defence of their ICC World Twenty20 crown off to a perfect start in tonight's record 116-run trouncing of Afghanistan at the Premadasa Stadium.

Wright crunched eight fours and six sixes from only 55 balls, and became the second Englishman this year to miss out on his country's first Twenty20 century by just a single run.

He powered England to 196 for five, overwhelming any prospect of a successful Afghanistan chase as the minnows folded to 80 all out in reply.

It was down only to number eight Gulbodin Naib's 44 that they bettered by 13 runs the lowest-ever score by any international team in this sprint format.

England are therefore assured of a place in the Super Eight stages, irrespective of how they fare back here on Sunday against India - who have also qualified after their own opening Group A victory over Afghanistan.

Wright, absent for nine Twenty20 matches until Ravi Bopara's loss of form necessitated his return this month, could manage only two from the final ball of the innings to finish stranded one run short of three figures.

His 99 came three months after team-mate Alex Hales had been dismissed for the same score at Trent Bridge against West Indies.

Number three Wright today shared stands of 69 for the second wicket with Hales, and then 72 for the third with Eoin Morgan. He came to the crease with England immediately up against it, after being put into bat under lights.

Craig Kieswetter allowed Shapoor Zadran to open the match with five dot balls and then edged the sixth down on to his stumps as the left-armer began with a wicket maiden.

Hales edged Dawlat Zadran over slip to take four off his first ball, but might have been run out without addition had Nawroz Mangal managed a direct hit from mid-off.

It took England 10 balls before they managed to score off Shapoor. But there were then 19 runs off the bat, including a memorable straight six from Wright from the last ball, as Shapoor's third over cost 23 in all.

Hales was run out at the non-striker's end, when Wright drove one straight back at Karim Sadiq, and several of the 'middle' overs then belonged to the Afghan spinners while Morgan found his range.

But Wright hit leg-spinner Samiullah Shenwari for his second six, high over long-on - and the charge was soon on.

Morgan managed only one boundary shot, a six over midwicket off Mohammad Nabi, but operated at better than run-a-ball rate before he holed out in the leg-side ring.

Wright's innings was unblemished, until Izatullah Dawlatzai dropped a straightforward chance at point to reprieve him off Nabi on 75.

Wright and Jonny Bairstow then made Dawlatzai pay a personal cost as they launched 32 runs, including four sixes, from the seamer's penultimate over of the innings.

It was inconceivable that Afghanistan would be able to get anywhere near their target - and that was reinforced after two wickets had fallen in the space of two balls inside the first two overs.

Steven Finn had Mohammad Shahzad skying a catch to captain Stuart Broad at mid-off, and then Shafiqullah went for a golden duck in a near action-replay at the other end - off Jade Dernbach.

Broad pulled off an outstanding return catch to see off Mangal - and from 14 for three, it was merely a question of where England's yawning victory margin might stand in the record books.

Two more pieces of brilliance in the field accounted for the next two wickets, Sadiq run out by Jos Buttler and Asghar Stanikzai very well caught by Bairstow - diving in from fine leg.

Only Naib mustered double figures, and was responsible for more than half his team's total - including 16 runs in an over off Graeme Swann and then successive sixes off Dernbach.

England were in cruise control, however, as they continued to outclass the opposition on the way to erasing their 2005 100-run win over Australia as their biggest victory margin in this format.

The champions therefore put down a statement of intent about their determination - under a still new captain and without the assistance of superstar batsman Kevin Pietersen - to retain the only International Cricket Council global trophy England have so far won, in almost 40 years of trying. 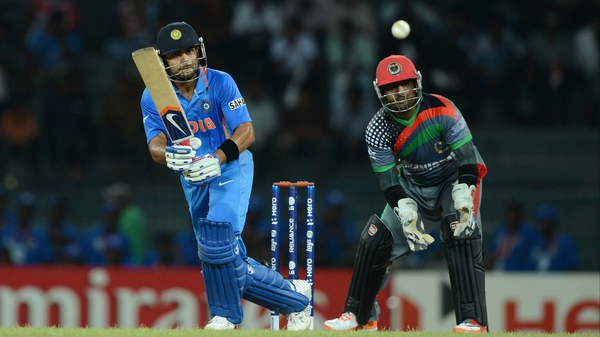 Afghanistan falls short of upset against India in Twenty20