By Declan Whooley at Croke Park

Kilkenny edged out Cork by 1-13 to 1-12 in a topsy-turvy encounter to be crowned Glen Dimplex All-Ireland senior camogie champions at Croke Park.

For the third time in six years, just a point separated the two teams in the sport's showpiece, but on this occasion it was the Cats that came out on top in a game that swung on a 57th-minute goal from Kilkenny replacement Sophie Dwyer.

In front of a crowd of 23,426, Brian Dowling’s side raced out of the traps to score six unanswered points before Cork rallied to ensure a level game at the break.

In a nip-and-tuck second half, the sides traded scores before Cork opened up a two-point lead and appeared to be condemning the Cats to a fifth final defeat in a decade.

However, the late goal turned the game on its head and while Cork levelled matters through Katrina Mackey, a 62nd minute Denise Gaule free was ultimately the difference between the sides.

Denise Gaule wins the All-Ireland title for Kilkenny with a late free.

It was tight, dramatic, and the Cats win by the tightest of margins. pic.twitter.com/9rdsNHTGKd

The band had barely finished the final bars of Amhrán na bhFiann when Tiffanie Fitzgerald drifted up from her corner-back position to avail of generous Cork defending to put the Cats ahead with less than 15 seconds on the clock, snapping her effort between the posts at the Canal End.

In a frantic start, both sides were guilty of early misses – Katie Power with two disappointing efforts and Sorcha McCartan’s high shot chalked off by Hawk-Eye – but it was Kilkenny who settled better.

Brian Dowling’s side were able to pick out team-mates with greater ease, with Kaite Nolan finding her range early doors.

Cork corner-back Meabh Murphy, starting her first senior final, was handed the task of following the two-time Player of the Year, with Gaule drifting in between the half and full-forward lines.

She claimed two points in quick succession but was also a creator, with Miriam Walsh profiting from her accurate stick work.

Walsh was shadowed by Libby Coppinger, but swung over two identical points off her left under the Cusack Stand to continue her outstanding season to date.

With the sun coming and going behind the clouds, it was a red-hot start from the team who had gone through a league and championship without tasting defeat.

Aside from two probing Hannah Looney balls, the Rebels looked devoid of attacking ideas and Cork coach Davy Fitzgearld was an animated figure on the sideline with his defence under siege.

Gaule’s second score pushed the Kilkenny lead out to half a dozen points, and they could easily have been further ahead such was their dominance.

In the semi-final win over Waterford, Cork had to wait 24 minutes for their first score. That unwanted stat was only bettered by three minutes in the decider, but when it came it was just the tonic they needed, with Fiona Keating breathing life back into the contest to drill her effort into the bottom corner and past Aoife Norris.

Fiona Keating brings Cork to life in the final with their first score after 20 minutes.

Highlights on #sundaygame from 9.30pm.

From there until the half-time whistle Cork took over, aside from Michaela Kenneally opening her account. Her white flag in the 14th minute would be their last score of the half.

Centre-back Laura Tracey started to grow in influence, sitting as the sweeper, mopping up dropping ball and feeding her forwards with some quality passes, while Amy O’Connor began to stamp her class on proceedings both from play and placed balls.

Now it was Kilkenny who were hemmed in, with Mackey buzzing around the pitch.

Keating added to her goal by scooping a ruck ball to reduce the deficit to the bare minimum and Mackey would have the final score of the half to level matters, 1-04 to 0-07.

The first eight scores of the half were shared, Katie Nolan slotting over a couple of frees and Miriam Walsh a real thorn in the Cork defence.

The Tullaroan woman was the focal point up front, while at the other end Keating was punching holes in the Kilkenny defence while Mackey and wing-back Saoirse McCarthy, continuing her habit of aiding the Rebel attack, slung over two sublime points under the Cusack Stand side, with Mackey’s effort getting a rapturous response from the supporters in red given her acute angle.

Saoirse McCarthy with a magnificent point from distance for Cork.

The nip-and-tuck nature at a sun-splashed Croke Park made for absorbing viewing and Amy O’Connor’s free in the 47th-minute nudged Cork into a 1-09 to 0-11 lead.

Cork’s running game was proving highly effective and this was compounded for Kilkenny by some missed frees.

Wing-back Laura Hayes was to the fore in Cork’s energetic game plan and she found her inside forwards on a couple of occasions where the Kilkenny defence was left scrambling, O’Connor knocking over successive frees to push the advantage to two points with five minutes to play.

Gaule screwed another free wide of the posts with the game going down the stretch, but Dwyer’s goal changed matters dramatically.

Sophie O'Dwyer with a late, late goal for Kilkenny. They lead after trailing for much of this half.

Goalkeeper Amy Lee could only bat the deflected shot from Niamh Deely in front of the posts, where the James Stephens player pulled on it first time to push her team ahead.

Yet again it was Cork’s running that led to the equalising score as Mackey bore down on goal, but she was happy to flick over for a point to level once again in the final minute.

Ciara O’Sullivan was the latest player to halt Walsh by foul means and Gaule, despite some woes from earlier placed balls, edged her side in front with high pressure free in injury time.

In the fifth minute of injury time, Thompson had one last chance to draw the sides level again, but it wasn’t to be as Kilkenny took the spoils. 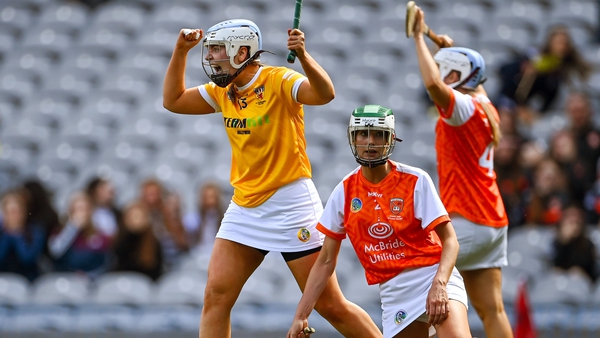