Cork's talismanic Ashling Thompson had a two-game ban rescinded on the eve of their All-Ireland Senior Camogie Championship semi-final win against Waterford on Sunday.

Due to the last-minute nature of Thompson's availability, Cork manager Matthew Twomey chose to keep the former All-Ireland winner on the bench.

Twomey however did admit that Thompson was needed earlier than expected.

Speaking at the launch of the 2022 Glen Dimplex All-Ireland Camogie Championship finals, Twomey said it was a huge relief to be able to call on Thompson when the game was in the melting pot.

"I suppose we thought she was going to be gone for the rest of the campaign, but thankfully when we got the phone call coming off the train, it was a huge relief.

"We had to use her probably sooner than we thought, but when she came on the field she was a colossus."

Thompson herself admits the uncertainly around her availability made it a tough week but she was glad she was able to play her part in Cork reaching another All-Ireland final.

"It's your goal at the end of the day, to get to the All-Ireland final and to build collectively as a team.

"I think we've done that from the outset, we've had a few setbacks along the way but we've really grown together as a unit.

"Obviously it was a difficult enough week before the semi-final."

Thompson says she was not used to watching on from the sidelines as Cork started sluggishly to trail the underdogs.

The Millford star was brought on only 23 minutes into the game with the Rebels scoreless and trailing Waterford by four points.

"I was only saying it to one of the girls that I was fit to run into the tunnel after five or 10 minutes.

"Just in general, it's very hard to watch it from the line. It's something that I haven't really experienced myself."

Thompson says it was frustrating to watch her team-mates struggle but she knew they would not panic.

"It was frustrating, but I have a lot of faith in those girls. We don't really do panic. I know for the audience looking on, there was probably a lot of panic in the stadium, but I had no fear to be honest.

"I have their back the same way that they have mine."

There was still plenty of time for Cork to get back into the game but Thompson admits she is unsure if the backroom member Davy Fitzgerald was too calm on the sideline.

"There was a lot of time left, there was 40 minutes to be played, and to me that was plenty to give.

"I don't know if Davy Fitz and calm goes in the same sentence! His experience alone, there's enough to be said for.

"He has faith the same way Matthew has faith in us and there was plenty of time left, fortunately."

Cork meet Kilkenny on 7 August in Croke Park in the decider - a game which will be shown live on RTÉ 2. 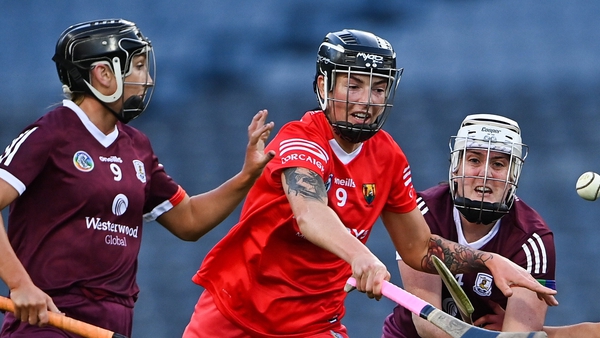