Galway held off the spirited attentions of a dogged Limerick side to bounce back from last year’s replay defeat and eke out a narrow but deserved  0-12 to 0-10 victory at a blustery Croke Park.

Orlaith McGrath – whose father Michael ‘Hopper’ McGrath enjoyed many successful days at headquarters – was in scintillating form for the Tribeswomen and it was no surprise that the Sarsfields attacker earned the Player of the Match award.

Limerick fought to the bitter end but their much vaunted forward line got absolutely no change from a splendid Galway rearguard. And so, the Shannonsiders were heavily reliant on Niamh Mulcahy’s well-judged shooting in nightmarish conditions for freetakers to keep them in contention.

Indeed, the Ahane ace did that to such a standard, with seven of her eight points coming from frees, that Limerick were within a point entering injury time and had Galway supporters biting their nails right up to the final whistle.

The Maroons held on though to bag what they hoped would be the first leg of a double for the county and manager Tony Ward, with the seniors in action afterwards.

Limerick actually took an early lead after Caoimhe Costello followed a pacy run with a neat finish and when Maria Cooney equalised from close range, Mulcahy had them back in front.

Galway gradually imposed themselves though and three points from Rebecca Hennelly, McGrath and a classy finish by Aoife Donoghue, put them ahead. 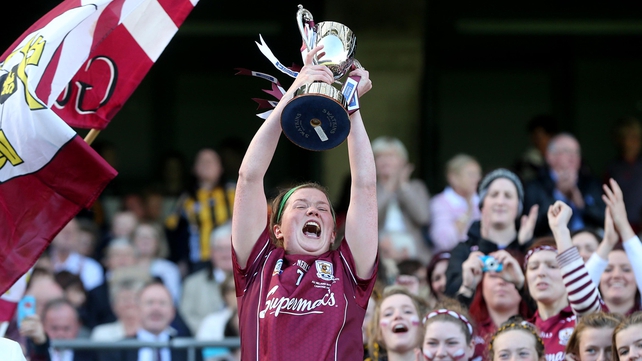 Having led by 0-6 to 0-3, they were reeled back in courtesy of Mulchay and it was level scores at the interval.

Mulcahy gave Limerick the lead early in the second half but a run of three points, with McGrath providing one either side of Donoghue’s second score, pushed Galway clear once more.

Síle Moynihan made a brilliant save from Karen Kennedy five minutes from the end of normal time to keep Joe Quaid’s side in touch though and two brilliant Mulcahy frees left it at 0-11 to 0-10 entering injury time.

Hennelly pushed the gap to two with a 62nd minute free but Karen O’Leary almost snatched a dramatic victory for Limerick, only to see her shot deflected out for a 45.