Katie Taylor says she's determined to hold on to all her world championship belts for as long as possible ahead of her fight with former IBF world featherweight champion Jennifer Han in Leeds on Saturday.

Taylor, whose professional record now stands at 18-0, retained her title belts after a unanimous decision victory over Natasha Jonas in May.

This weekend, the Bray fighter puts her titles on the line against 38-year-old American Han, her latest mandatory challenger who heads into this weekend's clash on the back of an eight-fight winning streak.

"I think the last 12 months have been fantastic for me personally," says Taylor.

"I’m still sitting here as the undisputed champion, 18-0 with some fantastic performances and some amazing fights under my belt. The fights I’ve been in have elevated women’s boxing to another level.

"I’m going to try my best to hold on to every one of those belts for as long as I can. This is what I’m in the sport for. I want to make history, I want to be a world champion and I want to hold all of the belts - I’m all in.

"The women are definitely more inclined to take a few more risks and actually go in and take the bigger fights. I love that about the female fighters. We actually want the big fights."

From El Paso in Texas, Han captured her first world title belt when winning the IBF featherweight belt against Helen Joseph in September 2015. Two years shy of her 40th birthday, she is ranked sixth in the lightweight division by BoxRec. 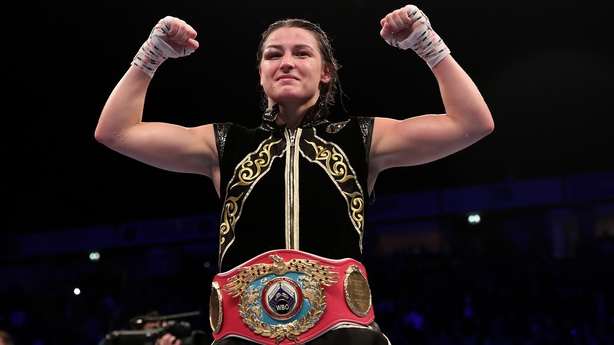 "I’m expecting the toughest fight from Jennifer," said Taylor. "She has a lot of amateur experience and she’s a very technical fighter. She’s a six-time world champion. She was my No.1 Mandatory as well so I had to take the fight. These girls have stepped up – they’ve boxed beyond themselves, they have raised their game against me.

"She is a fighter that believes in herself. This fight is going to bring the best out of the both of us. I love the fact that she’s stepping into the ring confident like I am as well. I don’t really take much notice of what other fighters say, I just focus on my own performance and my own preparation."

The fight will take place in Headingly Stadium in Leeds, as part of the co-main event for the rematch between Josh Warrington and Mauricio Lara.

Taylor still has an affinity with the city, it having the birthplace of her father.

"My father was born and raised in Leeds, so we all grew up as Leeds United fans," said Taylor. "There are still a few Leeds United fans out there! I'm really excited to fight in Leeds and in front of so many fans. It's kind of like a second home to me so I just can’t wait. It’s going to be so exciting boxing in front of 20,000 people. The atmosphere is going to be insane."