Anthony Joshua has restated his commitment to a world heavyweight title showdown with Tyson Fury and indicated the prospective super-fight could take place in June.

Joshua was criticised by Fury for allegedly not showing enough commitment to the contest after his stoppage win over Kubrat Pulev this month.

But the 31-year-old has confirmed talks are under way and he is unconcerned over where the fight would take place, with Britain looking increasingly unlikely.

Joshua told Sky Sports News: "I'm ready, I'm keen. The next fight I want is Tyson Fury, for the undisputed championship of the world.

"I'm having direct conversations now with my management team looking at the best way to put a package together for 2021 and hopefully it will be done."

Asked when and where he expected the fight to take place, he added: "I think maybe June. It needs a bit of time. I promise you conversations and face-to-face meetings are happening with representatives of my team and Tyson Fury's team. 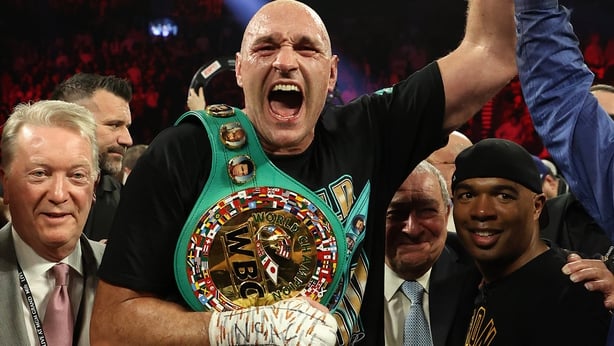 "The possibilities of it being in this country are down to the pandemic and how that shapes. For me I am not too fussed where it is. I just want the fight."

Meanwhile, Joshua has warned the next generation of boxing stars could be lost to the sport if it fails to gain more financial support through the coronavirus pandemic.

Many amateur gyms have been forced to shut and there are fears some could close for good unless more assistance is forthcoming.

Joshua, who fought at Finchley before roaring through the amateur ranks to win gold at London 2012, has made a substantial financial donation to clubs via the three home nations federations.

Joshua said: "Boxing helped shape me, both physically and mentally. It is not secret that without boxing and the family created around my amateur gym, my life could have been very different.

"The sport has given me a lot and I want to help highlight the issues affecting grassroots clubs and do what I can to keep the lights on for those most in need.

"I am not using this as an opportunity to criticise government for its lack of funding towards boxing - these are unprecedented times - however I would like to use my platform to respectfully ask them to rethink their stance.

"Without support we will lose community hubs and potentially the stars of tomorrow."

The funding will be distributed to clubs via England Boxing, Welsh Boxing and Boxing Scotland, whose chairman Kevin Bell said: "It is to Anthony's great credit that he recognises the impact of COVID-19 on amateur boxing, from loss of training among boxers to the inability to host shows that sustain clubs financially.

"It is also the hallmark of a true world and Olympic champion that he has proactively sought to help amateur boxing - which he acknowledges played a significant role in his career - during this ongoing period of uncertainty."