Anthony Joshua produced a devastating ninth-round stoppage of Kubrat Pulev to start the second defence of his reign as world heavyweight champion in style.

The Briton dominated throughout at Wembley's SSE Arena and a stunning combination finally saw off the valiant efforts of the challenger, who had been down three times before failing to make the count at the fourth time of asking.

It meant Joshua retained his WBA, WBO, IBF and IBO belts and more importantly stays on track for a twin-fight with Tyson Fury in 2021.

A 'Battle of Britain’ could sell out across the continent and plans for it to be hosted at Wembley will depend on how many fans are able to attend, with only 1,000 spectators inside the SSE Arena due to the coronavirus pandemic.

Pulev had talked the talk in the build-up to this fight and insisted he had been waiting for a second chance at Joshua after he was forced to pull out of a 2017 meeting due to a shoulder injury.

But after putting the challenger down twice in the third, Joshua did the same again in the ninth and the final knockout blow proved too much for the 39-year-old to come back from.

"We did our press conference on Thursday, we had the weigh-in on Friday and it is less talk, more action. I hope everyone went home happy," Joshua told the fans after.

"Of course I want a challenge. It is not about the opponents, it is about the legacy of the belt. Whoever has got the belt, I want the challenge. If that is Tyson Fury, let it be Tyson Fury."

With an agreement already in principle for two meetings in 2021, only the finer details need to be resolved for a mouthwatering unification bout.

Eddie Hearn added: "We will be friendly, we will be nice and we know what we have to do. Starting from tomorrow let’s make this Tyson Fury fight happen.

Tyson Fury, who declined an offer to attend, immediately took to Twitter after Joshua’s victory and said: "I want the fight, I want the fight next and I will knock him out inside three rounds." 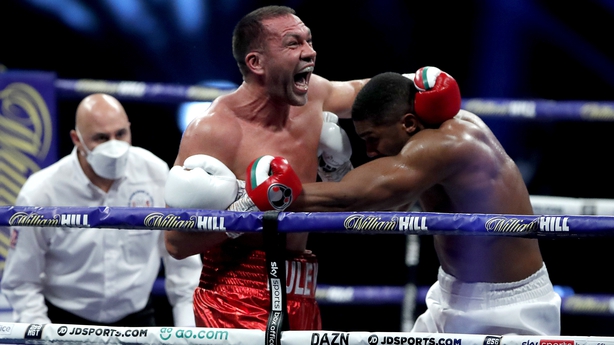 It was anything but a typical world heavyweight title fight, with both trainers and ringside teams wearing face masks and full-face shield visors while the SSE Arena was the host, not the usual venue of Wembley Stadium.

Nevertheless, the sound of Sweet Caroline raised the decibel levels and Floyd Mayweather Jr was a surprise onlooker after he made a late dash to support the Briton.

After winning back his belts with a disciplined display against Andy Ruiz Jr in Saudi Arabia 12 months ago, the champion hinted he would be destructive this time.

Following a cagey opening two rounds, Joshua was true to his word in the third and put the Bulgarian down twice, the second time through a vicious uppercut that left Pulev appearing to walk back to his corner.

Referee Dion Dwarte gave the challenger the chance to make the count and he did, but in spite of his smile after the first knock down it appeared only a matter of time before the coupe de grace was provided.

Pulev’s desire to win was fuelled by the dream of his late father to have a world heavyweight champion son and he walked out for the fourth ready to go to war again.

Joshua continued to dominate during the middle rounds, but his 39-year-old opponent was able to recover admirably and even though his repeated rabbit punches went unpunished, he was still standing moving into the second half of the bout.

The seventh session brought more punishment for the Sofia-born boxer, yet he stood firm and attempted to rile his rival with another punch after the bell. Many predicted the latter stages of the bout would lead to a conclusion inside the distance, and the fans scented it was coming in the eighth.

A roundhouse combination from Joshua failed to spark the vicious ending he sought and he was then caught by the Bulgarian with a straight drive, though that did little for the scorecard.

In the end the finale arrived in the ninth and it was worth the wait for those lucky few who had secured the limited number of tickets which went on sale earlier this month.

One more uppercut from the Watford man had Pulev in trouble before another sent him down again. While he got to his feet, a left-right combination put the challenger down and there was no way back.

Joshua added another knockout to his record and is now 24-1 with the prize surely a 2021 meeting with Fury. This fight was one of the few hurdles still to be cleared, but with one less in the way, Hearn and Bob Arum can now get to work.

There is the small matter of Deontay Wilder and Oleksandr Usyk wanting fights with the Brits, but both are likely to be put on the backburner.

There is also a venue to be found. London would be the preferred option but only if a full capacity can be guaranteed at Wembley. It would surely sell out to bring back memories of Joshua’s victory over Wladimir Klitschko in 2017.

If the coronavirus pandemic ensures stadiums can still not be sold out in this country in May or June, it is likely the bout will be taken to the Middle East with Abu Dhabi, Qatar and Saudi Arabia the likely bidders.

Victory for Joshua ensured all this remains relevant and while the manner was impressive, he will be aware tougher challenges lie in wait. Many will hope that will take the form of a long-awaited unification with Fury in the summer.