Katie Taylor put on a boxing masterclass and successfully defended her undisputed lightweight title against Spanish challenger Miriam Gutierrez at the SSE Arena in Wembley.

The Bray fighter extended her record to 17-0 and inflicted a first professional defeat on Gutierrez with a totally dominant display.

Taking the fight to the challenger from the first bell, Taylor started aggressively and continued in that vein throughout the entire bout.

The champion looked to make a real statement from the off, charging towards Gutierrez and rocking her with a powerful right before following that up with a big flurry of punches that set the tone for the evening.

A combination of focused aggression and absolute precision with her punches meant that Taylor was in control throughout and as the fight wore on, the only question appeared to be when she would win.

Taylor settled into a less frantic rhythm in the second round, setting herself up in the centre of the ring and looking to push her opponent onto the ropes where she could unleash real punishment.

That tactic paid dividends in the third round when a big left and right combination from Taylor forced Gutierrez onto the backfoot and up against the ropes, allowing Taylor to catch her with a powerful flurry that, for a second, looked like it could stop the fight.

Gutierrez was able to grasp onto Taylor and catch her breath, before seeing out the round but that was the pattern that the rest of the fight would follow. 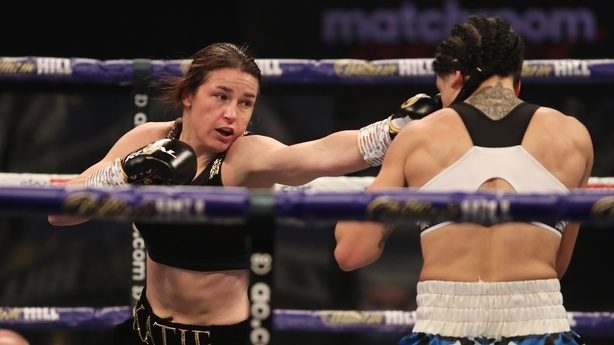 Right on the bell to signal the end of the fourth round Taylor caught Gutierrez with a jab and then a thunderous left that sent the challenger to the canvas for the only occasion in the fight.

Gutierrez took a standing eight count and it appeared that she wouldn't be able to last much long but the story of the fight soon became about the toughness and heart of the challenger who refused to be stopped.

Unbeaten in all of her 13 professional fights up until this stage, Gutierrez came into the bout with the reputation of a real power puncher but it was her ability to take so much punishment and keep fighting that really impressed.

Taylor continued to out-fight and out-box the Spaniard but Gutierrez refused to go down again, and always managed to come back with just enough to convince the referee to allow the fight to continue.

As the rounds progressed and each one of them went to Taylor, there was a dawning realisation that the stoppage that the Irish fighter was looking for may not come.

Taylor continued to pile on the punishment and Gutierrez continued to absorb it and at times almost looked to be enjoying herself in the ring as it became a battle of wills.

The knockout punch was to elude Taylor but when the final bell went there was no question that she had won every round, even if one of the three judges did appear to award a round to Gutierrez.

More physically testing fights are in store for Taylor further down the line and afterwards both she and her manager Eddie Hearn once more laid bare their eagerness for a showdown with Amanda Serrano, but for now the undisputed champion can bask in the satisfaction and another job well done.

"I thought it was a great performance and she was very tough. I tried my best to get her out of there at times," the champion said afterwards.

"She's very durable but I couldn't get her out. I would have loved to get a stoppage today but it was a great performance. I was very happy today.

"There are no shortage of big fights out there. It is all about the legacy and making history in this sport and inspiring the next generation but yeah, people still haven't seen the best of me yet."