Carl Frampton has set his sights on a world title showdown with Jamel Herring later this year as he prepares to return to the ring.

Top Rank chairman Bob Arum has confirmed that the two men, who were due to contest the WBO super featherweight crown in Belfast in June before the ongoing coronavirus pandemic scuppered the plan, are scheduled to meet in November should the restrictions in place at the time allow it.

Arum admitted the eagerly-anticipated fight, which is dependent upon Frampton beating Darren Traynor on Saturday and Herring seeing off Jonathan Oquendo in September in a bout which has had to be rescheduled after the champion twice tested positive for Covid-19, may have to take place behind closed doors in the United States.

Speaking at a press conference on Wednesday evening, he said: "Jamel Herring will defend his title against Oquendo, finally we'll get that off. We had two postponements because of this coronavirus.

"But that fight will happen 5 September and if Jamel is successful and if Carl is successful on Saturday, I have a date picked out in November where they will fight for the title. That's done. Everybody is on board.

"One thing I can't control is the virus, but we're going to do that fight in November. It may very well be another bubble fight - in other words, with no fans and we'll have to get Carl over to the States to do it.

"But if both guys win these interim fights, you can count on a world title fight between Herring and Frampton in November." 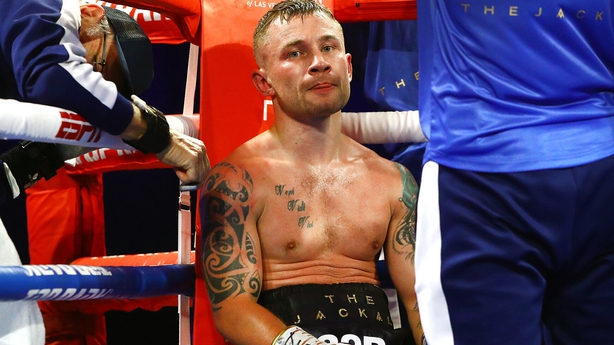 The news came as major boost to former two-weight world champion Frampton, who is bidding to add another title to his curriculum vitae after briefly considering his future in the sport following his defeat to Josh Warrington in December 2018.

The 33-year-old, who has fought only once since that night after a series of postponements, wants to make history by becoming Ireland's first three-weight world champion. Frampton, Katie Taylor and Steve Collins are the only three fighters from this island who have conquered the world at two separate weights.

"After the Josh Warrington defeat, in my head I was retired, I was going to retire," he said.

"I hadn't announced retirement, but I suppose I was not embarrassed, but my pride was hurt a little bit.

"Then when I sat down and reflected on the fight, I knew that it was more down to a bad performance from me and me tactically getting it very wrong and tactically making wrong decisions in the first three rounds.

"That was the reason I lost that fight more so than me being over the hill or on the slide because if you see what I'm doing in the gym still, you wouldn't suggest that I'm over the hill, like some people are doing at the minute.

"I know that I'm a better fighter than the Warrington performance and there's a lot of of stuff that's gone on - the break of the hand and stuff and other things, and coronavirus too.

"But I haven't thought about that again since the Warrington fight. I want to win a world title and that's the drive.

"I hope I don't disappoint at the weekend. I'm sure I'll win the fight and the fight with me and Jamel Herring will be a dream come true."