Tyson Fury produced a stunning performance of patience and power to stop Deontay Wilder in the seventh round to finally win the WBC world heavyweight title.

Fourteen months on from his controversial draw with Wilder - when he outboxed the champion only for two knockdowns to deny him the famous green belt - Fury had vowed to take the fight to the American.

He did just that, flooring the champion twice and completely dominating the action before Wilder's corner threw the towel in to save the despairing, bewildered champion from more punishment.

Fury - a former unified champion who dethroned the great Wladimir Klitschko before being hit by depression and addiction - looked typically relaxed dressed in a fancy dress 'King' costume as he was carried to the ring in a moving throne. 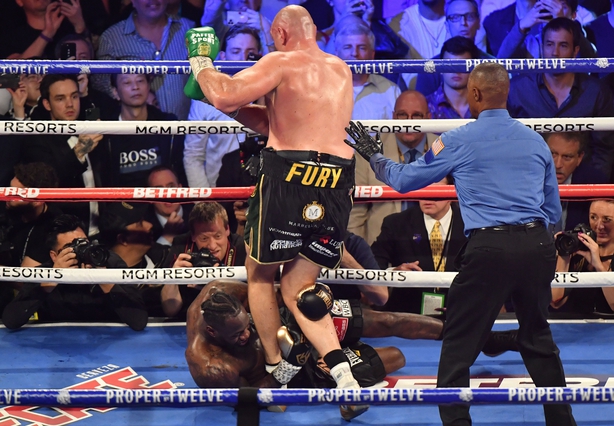 Wilder, with 42 wins and 41 knockouts on his record as well as the December 2018 draw with Fury, received a hostile reception on home turf. After a tentative opening minute, Mancunian Fury (29-0-1, 20KOs) began to take control while chants of "you big dosser" aimed at Wilder rang out.

Round two saw a big right from Wilder land quite cleanly but Fury was not bothered and in the third, Fury perfectly timed a right hand near Wilder's left ear to send him scrambling to the canvas.

Fury was similarly dominant in the next two sessions before the fifth began with another huge right, as he justified the extra stone he weighed in at from the first fight. A right to the head and left hook to the body had a tired Wilder down again.

He was up quickly but seemed to be flagging as Fury looked to bring about a conclusive finish. A right uppercut nearly provided it only for Fury be warned about leaning by referee Bayless. Very few spectators were in their seats at this point.

Fury was giving Wilder hell but the shattered champion was still seeking a Hail Mary punch of his own. Even a jab had Wilder hurt, before a left hook seconds later.

Another left hook finished another superb round for the Briton. Wilder was in a sorry state by the start of the seventh.

Another left hook had him hurt and all he could offer was his trademark, lazy, looping right hand. Fury pinned him in the corner and Bayless quickly jumped in to stop it, prompting incredible scenes inside the arena.

Wilder was taken to hospital after the fight for precautionary checks. The American also required a couple of stitches for a cut in his ear.