Tyson Fury has vowed to knock Deontay Wilder out in the second round of their eagerly-anticipated heavyweight rematch next month.

Speaking at the opening press conference to preview their rematch on 22 February, Fury said: "Deontay knows he was rocked three or four times in the last fight and I didn't have the gas to finish him. This time I can turn that screwdriver until he is gone.

"You are going to sleep in two rounds. I keep having the same dream about round two. I am playing poker and I get dealt the number two card. He is getting knocked out in round two, 100%. 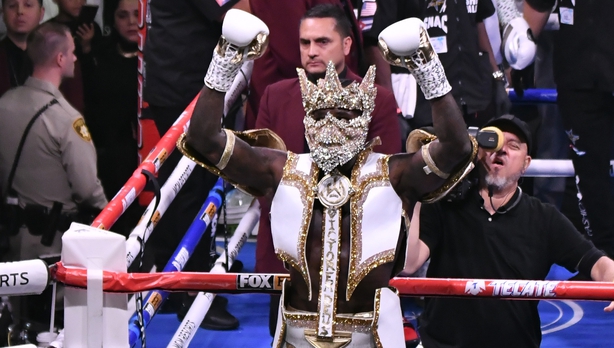 Fury, 31, has teamed up with Javan 'Sugar' Hill - the nephew of the late trainer Emmanuel Steward - after splitting from Ben Davison.

Explaining the decision to switch trainers for the rematch, he said: "I know I am not going to get a decision in the United States.

"I am looking for knockout number 21 [of his career]. That is brutally honest, that is coming from the heart."

The two fighters faced off before and after Monday's press conference before exchanging a handshake.

"I am prepared more than ever for this fight," said Wilder, 34.

"I knocked him out the first time.

"I told Fury two years ago I was going to baptise him and I did just that.  Rising up is part of the baptism.

"I told him he was going to go 'timber' and he did just that. This time around, it is called unfinished business and he won't be able to get back up. I am going to knock him out.

"I am the Lion. I am the king of the jungle and come 22 February I am going to rip his head off his body. I am going to knock him out of those ropes."