Delfine Persoon believes that defeating former Olympic champion Katie Taylor would help make up for her missing out on the Games as an amateur.

The Belgian WBC belt-holder, who takes on Taylor at Madison Square Garden on Saturday, missed out on an amateur career but says beating the 2012 gold medallist would be just as satisfying as becoming the undisputed lightweight world champion.

"I expect a tough fight," Persoon said at today's press conference in New York. "She had a lot more experience in amateur fighting.

"I was only an amateur for one year in Belgium because boxing was not very big and there was no national team.

"I got no chance to go to the Olympic Games but now I can compete with and hopefully defeat the Olympic champion.

"For me that's very important. I want to do everything in my boxing career." 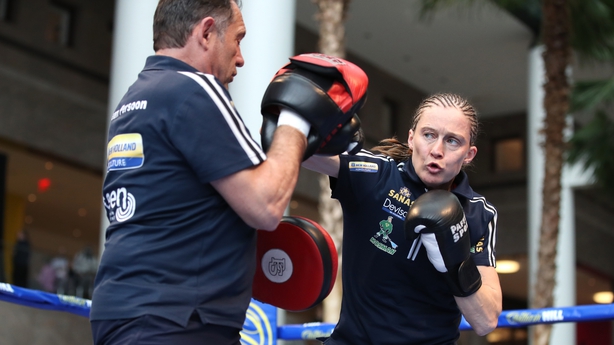 Persoon (34), who boasts a record of 43 wins and just one defeat, believes beating Taylor (32) could put boxing on the map in her country.

"Boxing is not recognised in Belgium," she said. "I'm the first boxer that can make history. It's very exciting. I can set boxing on the court in Belgium.

"We already prepared two months for this fight. My trainer was already looking for this fight for two years. He thought we would never get the chance.

"Now I have the chance. We are ready and will go for it."

Follow Katie Taylor vs Delfine Persoon via our live blog on RTÉ.ie/sport and the News Now app from 1.30am on Sunday morning