World amateur champion Kellie Harrington has described comments from Katie Taylor's manager that the Bray woman might never fight again on these shores are "strange".

The WBA and IBF lightweight champ is on record as saying she "can't wait to box at home in front of my own crowd" but previous hints at a bout in Dublin by promoter Eddie Hearn have come to nothing and Katie will fight in the USA for the third time in a row when she faces Rose Volante in a unification bout in Philadelphia next month.

Taylor's manager Brian Peters told the Irish Daily Star today that he doesn't think it's likely she will be back on home soil anytime soon.

"There were great days in the past with Bernard Dunne but we're in very different times and I'm certainly finished with running or any involvement with shows in Ireland," he said.

"Unfortunately, I don't believe Katie will be fighting in Ireland either. But we're very lucky to have such great opportunities in the US."

"It would be great if she came back here and fought in Ireland, in front of her own fans, her own people. That would be amazing"

Peters said last year that he had been advised that the security climate around boxing in Ireland was not conducive to holding a high-profile show.

Responding to Peter's comments today, Harrington, who last November won the same 60kg world title belt that Taylor claimed five times told 2fm's Game On: "That is a strange thing to say. She has a massive following over here.

"It would be great if she came back here and fought in Ireland, in front of her own fans, her own people. That would be amazing.

"I think if Katie has anything to do with it, she will want to fight in Ireland. She's very committed to her fans." 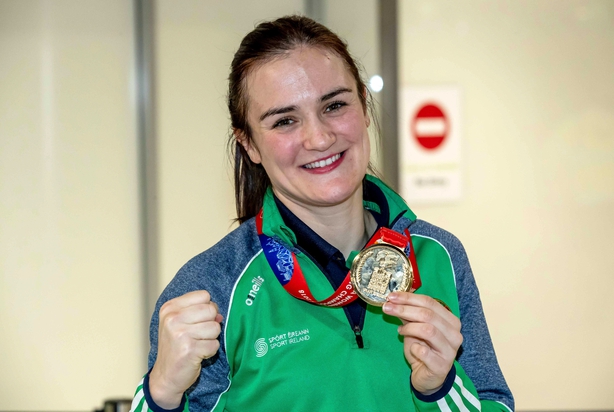 Harrington, who will turn 30 before next year's Olympic Games in Tokyo, believes the women's professional scene has improved greatly in recent years and she is now more open to the idea of turning pro than previously.

"A while back, the professional scene wasn't great," she said. "The girls in it weren't that great. But now you have girls turning over from the amateurs and it's starting to get tasty now.

"It might be something that I could be interested in. We'll see further down the line. If I got any nice offers to turn over, I would definitely have a look at them."