Carl Frampton will discuss his future today after considering retirement following his defeat by Josh Warrington.

The 31-year-old is to meet his promoter Frank Warren, and is hoping for an attractive offer to fight on having concluded after losing to Warrington last month that he needed to retire.

Since a family holiday in Dubai - spent partly with his trainer Jamie Moore - and conversations with others Frampton believes he remains capable of winning another world featherweight title.

Yet with a court case with the McGuigans and Cyclone Promotions set for May and the knowledge that the brutal fight with Warrington brought the end of his career closer, the Northern Irishman will tell Warren he is unwilling to drop down in level.

"After the fight I was done," he said. "Immediately after the fight, 'That's me, I'm never going to box again', so much so I said to my wife [Christine], 'I'm done, I don't want to do this anymore'.

"But things have changed; my opinion's changed. The fight wasn't how it was meant to go; I didn't carry the game plan.

"People who wouldn't have any financial benefit from it have told me I've plenty left and I thought, 'Do you know what? It was a f****** bad night'. The weight was okay; it was something else, and I still know I've got enough left.

"If I'd been getting beaten up in sparring that may have been time, but I sparred well and was in good shape going into the fight, but I didn't carry out the game plan.

"The first two rounds took a lot out of me as well; I underestimated his power, and it just wasn't me, a typical performance. I usually get up on my toes and move around."

Frampton is suing his former manager and promoter Barry McGuigan, his wife Sandra, and Cyclone Promotions on multiple grounds, including alleged withheld earnings from fights and a breach of the terms of an international promotional agreement. 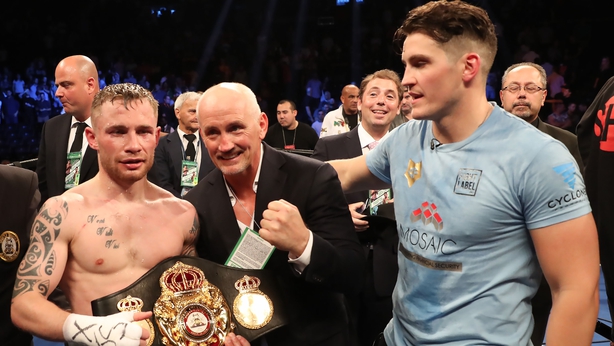 In turn, Frampton faces an action from them for an alleged breach of contract, potentially a significant distraction, but he insists neither is a concern.

"It's nothing I'm worried about, I'm sleeping easy," he said, maintaining it will not influence whether he fights again.

"I'm going to see Frank on Thursday and see what the options are. I'll hopefully know pretty soon."

Bob Arum, the promoter of WBO champion Oscar Valdez, has also spoken of Frampton as a potential challenger to the dangerous Mexican.

"It depends on what I get offered," he adds. "The last thing I want is Horacio Garcia, Nonito Donaire, Luke Jackson to get a shot at a world title again.

"I want to be walking into a big fight again or the premise of one fight and then a big fight, but I'm not prepared to go around the houses again."