Gary 'Spike' O'Sullivan marked his return with a points victory over Gabor Gorbics in Castlebar tonight.

O'Sullivan was forced the full eight rounds before getting the verdict over the journeyman who had won just three of his last 11 contests.

His conditioning for this contest was somewhat questionable as he looked sluggish throughout and found himself in a fight he really didn’t need to be in.

It wasn’t until the third round that he found any sort of rhythm, working well behind his jab. He landed a few hooks but nothing to overly trouble the Hungarian.

Indeed Spike was on the receiving end of some hard leather in the later rounds.

He did hold on however and came through winning on the referee’s scorecard by 80-72.

Middleweight Roy Sheahan recorded his fifth victory as a professional. 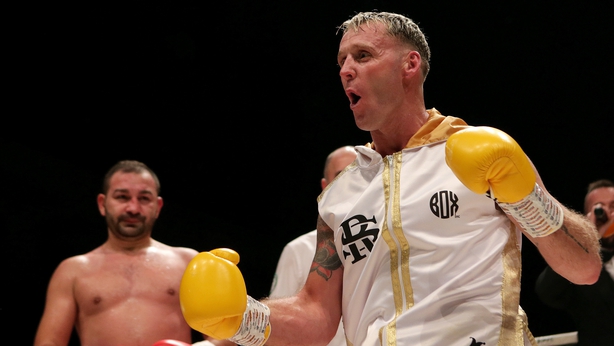 Romania's Marian Cazacu was no match for the former five-time Irish amateur champion.

Sheahan dominated from the opening bell and landed some heavy shots in the opening round.

The Romanian was already blowing heavily when the bell sounded for the second.

Sheahan, winner of the "Last Man Standing" contest earlier this year caught him at will with a range of shots.

It was left to referee David Irving to halt proceedings just before the end of the round as Cazacu was deemed unable to continue such was the dominance of the Athy man.

In the welterweight division, Dungarvan's Dylan Moran was forced the distance by a tough opponent Nelson Altamirano. 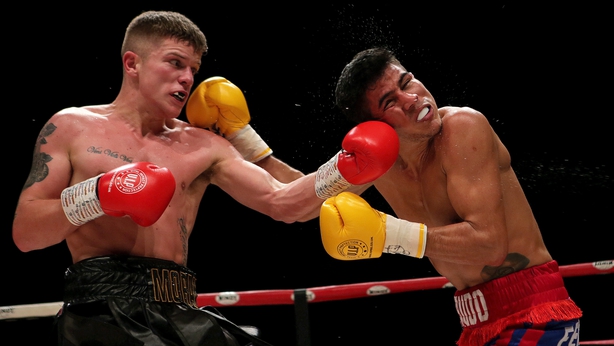 Southpaw Moran, came steaming from the corner as the opening bell sounded and landed a flurry of left hands, rocking his opponent.

The Nicaraguan however came through and soaked up even more pressure to hear the final bell at the end of six tough rounds.

But a bloody nose and a badly swollen face was evidence of what he had to endure as the referee awarded the contest to Moran on a 60-54 scorecard. 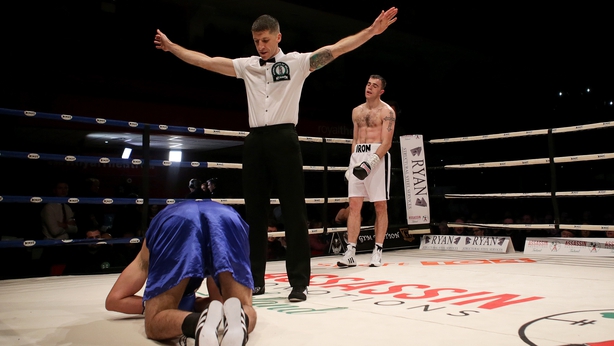 O'Brien beat Croatia's Alvin Kovacevic with a stoppage midway through the second round.

The Dubliner has his opponent backed up on the ropes throughout the first round but was lucky to escape a warning when hitting on the break which floored Kovacevic.

The second round was decisive with a right hand over the top forcing an early count.

Within 30 seconds the Croatian was on the canvas having taken a left on the chin. Still groggy he recovered to his feet but the comeback didn't last too long as a heavy left to the body brought the one sided contest to an early end.

Earlier there was a debut victory for Niall O'Connor while Cavan's Owen Duffy recorded his third win in the paid ranks with a second round knockout of Ivan Duvancic. 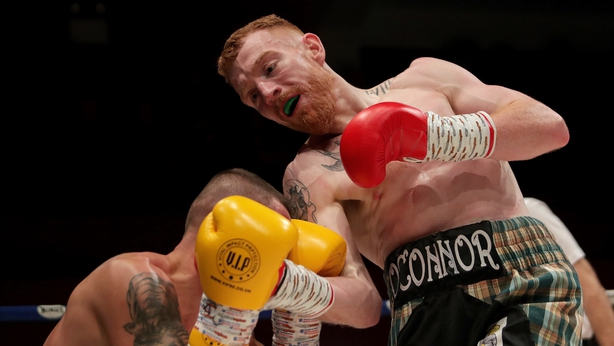 There was also victory in the night's opening contests for John Corcoran and Paddy Nevin, while Aaron Gethins won on debut.