Paddy Barnes claimed the vacant WBO inter-continental flyweight belt in Belfast when he stopped Eliecer Quezada in the sixth round with the last of a string of fine body shots.

The victory crucially sees Barnes gain a top-10 WBO ranking. Speaking to RTÉ Sport afterwards, the victor said: "I said at the start of my career, the better the opponent, the better I perform. When I got a better opponent, my performance upped.

"I gave away, height, reach and weight experience and age, he's younger, but it was special to get the ko."

Carroll was aggressive from the opening bell and while referee Phil Edwards warned the 25-year-old for throwing a few borderline low shots, he was landing plenty of legal and damaging punches throughout the bout.

De Santiago (now 15-5-1) had never been stopped prior to the contest, but Carroll (15-0) trapped the Mexican on the ropes to force a stoppage at 2mins 16 seconds of the third round to claim the stepping-stone title and boost his world ranking. 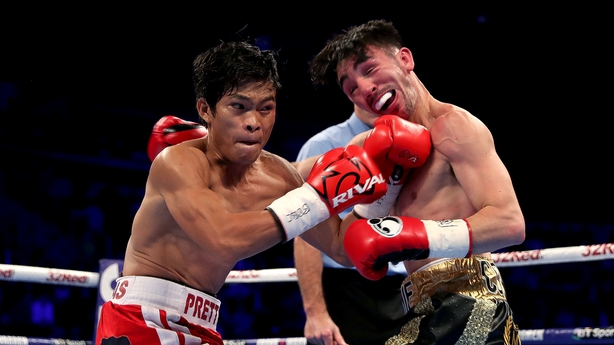 The news was not good for Jamie Conlan, however, when he lost his IBF World super-flyweight title bout against champion Jerwin Ancajas. Conlan was floored three times in the opening four rounds and then when down to a right hook in the sixth round.