Ryan Burnett became the unified bantamweight champion of the world after defeating Kazakhstan’s Zhanat Zhakiyanov to add the WBA title to his IBF crown at the SSE Odyssey Arena.

History was made in Belfast as the fight marked the first world-title unification bout to take place in Ireland, north or south.

After claiming a unanimous-decision victory, 25-year-old Burnett followed in the footsteps of fellow Belfast native Carl Frampton to become just the second Irish fighter to become a unified world champion as he now holds two of the four ‘major’ 118lb titles.

In a further interesting subplot to the bout, Burnett was coming up against an old sparring partner and his former trainer in the form of Zhakiyanov and the Kazakh’s coach, the two-weight world champion Ricky Hatton.

The fight was a competitive affair, with both combatants putting in a tremendous effort, although Burnett’s slick skills proved to be the difference against his 33-year-old opponent, whose record drops to 27-2.

Zhakiyanov entered the ring first, wearing Hatton’s trademark Manchester City sky-blue colours, to the sounds of ZZ Top’s ‘Sharp Dressed Man’ followed by Burnett – in black trunks with gold trim – accompanied by Queen’s ‘Another One Bites the Dust’ in front of a vocal home crowd.

The opening round was a fairly messy affair with referee Howard Foster speaking to both fighters midway through as they grappled regularly early on.

Dismissing a common perception that he is a slow starter, the bullish Zhakiyanov began the second round in lively fashion and was clearly out to upset Burnett as the rivals battled up close and personal.

With Burnett having picked up a nasty cut during his IBF title win over Lee Haskins last June, the inside action - and resulting meeting of heads - appeared to be a potentially dangerous development for the home fighter.

However, Burnett remained composed although the action continued to be tense and claustrophobic through the third and fourth before the pair began to trade more regularly at close quarters in the fifth.

The Belfast native was more selective with his punches in the sixth and seventh as Zhakiyanov continued to press forward.

The eighth round was a more balanced affair, with Burnett clearly marked up on his left eye and forehead by this stage.

While the bout remained competitive heading into the championship rounds, Burnett was enjoying the better of it, picking his punches off the back foot and off the ropes nicely at times. A determined Zhakiyanov refused to take a step back, but he was beginning to becoming more wild and reckless at times.

The visitor began the 12th and final round in an all-or-nothing style, taking the fight to the home champion, who gave as good as he got, although Burnett was clearly feeling the toll of an exhausting bout.

On the undercard, Rio Olympian David Oliver Joyce recorded a quick-fire first-round win to move to 4-0 as a pro, bombarding Gloucester journeyman Andy Harris from the opening bell until referee Éamonn Magill sensibly stepped in at 1 min 43 secs of the opener. 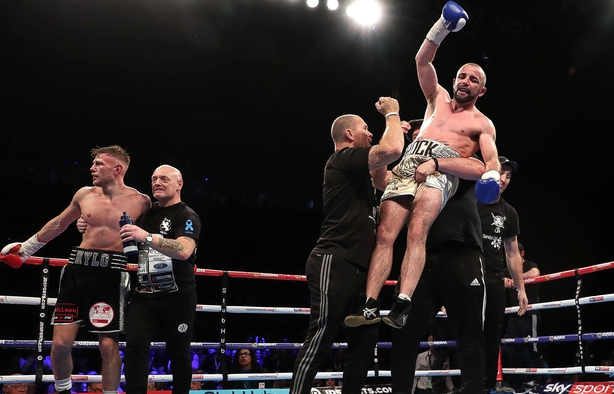 In the chief-support bouts, Belfast prospects Paul Hyland and James Tennyson both recorded victories to further their ambitions to challenge for major titles.

However, Hyland’s split-decision lightweight victory over Stephen Ormond was a contentious call with the Dubliner’s corner upset at the decision after a very close fight.

A straight right hand down the pipe from Hyland had Ormond on the seat of his pants in the third round and while the Clondalkin man rose to his feet, he looked unsteady before seeing out the closing seconds of the round.

Ormond valiantly battled back in the following rounds, with the 34-year-old veteran’s busy approach keeping him in the fight as he gradually enjoyed more success.

It was hard to separate the pair at times as Ormond’s work-rate contrasted with Hyland’s more selective shots.

However, judges Howard Foster (114-113) and Valerie Dorsett (117-110) overruled Pasquale Procopio (112-115) to give the decision to Hyland – although Dorsett’s lopsided card was highly questionable.

Tennyson got the better of Aberdeen’s Darren Traynor in an exciting three-round battle, with the Belfast featherweight flooring the visitor with a right hand early in a see-saw second round before Scot appeared to wobble the home fighter moments later.

However, another big right hand from Tennyson did the job in the third as he flattened Traynor, who failed to beat referee Terry O’Connor’s count. 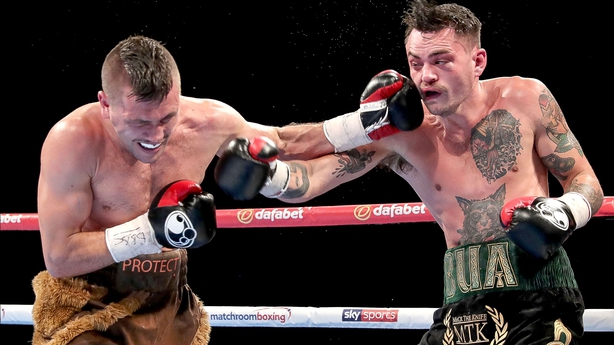 The eccentric Renald Garrido took to the ring dressed as a lion for his bout against promising Belfast light-welterweight Tyrone McKenna. Former French champion Garrido was a replacement opponent and he provided the undefeated McKenna (now 15-0-1) with a roaring test, despite a big height disadvantage, but the home fighter claimed a deserved 96-94 points victory.

Belfast cruiserweight and former Irish Elite amateur champion Tommy McCarthy made a successful return to the ring in his first fight in 11 months, recording a first-round stoppage win over Hungarian journeyman Peter Hegyes.

Earlier in the night, lightweight prospects Gary Cully of Kildare and Joe Fitzpatrick of Belfast both notched up stoppage victories.