Irish amateur boxer Caoimhin Hynes said he was "lucky to be alive" after being slashed in the face in Befast early on Sunday morning.

The Holy Trinity Boxing Club middleweight, who won gold at the Montana Belts multi-nation tournament just a week ago, was attacked by what the PSNI called "a number of males wearing track suits".

An altercation is believed to have started after someone threw a drink at Hynes' girlfriend outside a 24-hour McDonalds in the city centre, before one of the group of men slashed Hynes along the cheek.

Writing on Facebook on Monday night, teetotaller Hynes added that he was "blessed" and that "any lower and things could have been a lot different." 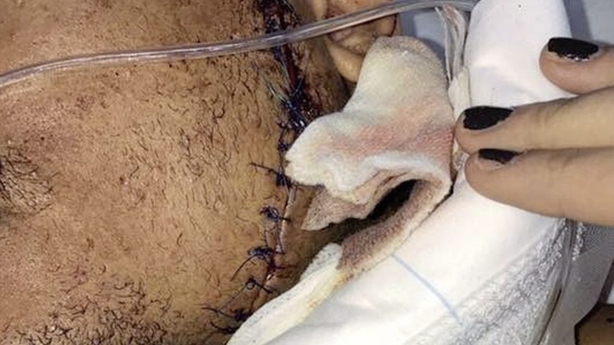 The PSNI have appealed for anyone who witnessed the assault to get in touch.

"Shortly before 2.50am police received a report of an ongoing altercation involving a number of people in Donegall Place," a statement said.

"A 20-year-old male sustained a wound to his cheek after he was assaulted by a number of males wearing track suits. He is currently in hospital receiving treatment.

"Detective Inspector Paul Rowland is appealing for anyone who was in the area of Donegall Place and who witnessed an altercation or anyone who has any information that can assist with the investigation to contact them at Musgrave Police Station."