Eddie Hearn has confirmed that an agreement regarding a potential fight between Amir Khan and Kell Brook has a "long way to go".

For the first time, however, he is adamant there is a "real desire from both fighters" to finally secure a date.

Matchroom's Hearn, who is also Katie Taylor's promoter, is exploring a possible fight between the two - which would be Britain's biggest outside of the heavyweight division - for May 2017.

After years of Brook aggressively pursuing his rival, Khan recently became the aggressor on Twitter when in a post referring to the IBF welterweight champion he wrote "Ready when you are".

Hearn believes Brook's recent fight with Gennady Golovkin has grown his profile to the extent Khan is finally tempted to face him, but has also stressed that previous negotiations have progressed further than the present ones without actually succeeding.

"Khan recognises the size of the fight, he's up for the challenge," said Hearn. 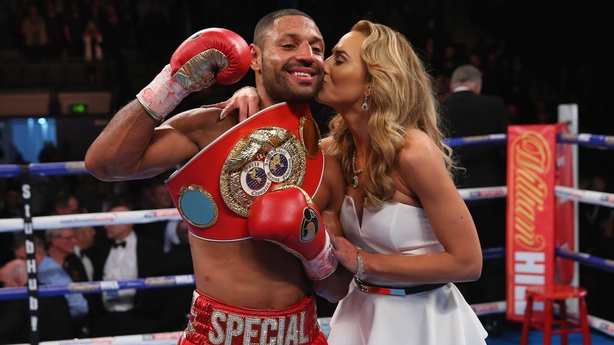 "Kell's value has increased considerably, and there seems to be a real desire from both sides to get it done, but we've been here before.

"We've held talks before, but there's never been the calling out from Amir that there is now, so that's why I say there seems a real desire from both sides. Not just both sides but both fighters.

"There's a very, very long way to go, but we'll work quietly behind close doors to try to finally get a fight over the line that I believe has to happen.

"It's still early days. We've been further down the road before in terms of negotiations than we are now, and I was confident then. I'm hopeful rather than confident. But when both fighters are calling each other out, it's always a good sign."

One possible reason Khan, 30, could be tempted is the likelihood Brook will struggle to return to the 147lb welterweight limit having challenged Golovkin at middleweight.

In Khan's past fight he also fought at middleweight - like Brook also being stopped, by Mexico's Saul Alvarez - but unlike Brook he has no history of struggling to make 147lbs.

Hearn insists Brook, also 30, planned to return to welterweight regardless, perhaps to defend his title against America's Errol Spence, and that both the fighter and those around him are confident he can still make weight.

The 1st man to smash kell brooks face @GGGBoxing, standing with him is the next guy to smash Kelly brooks face!  #ReadyWhenYouAre pic.twitter.com/ZBHA6JVS1o

"When we had our meeting a couple of weeks ago the plan was very much 'I don't want to vacate my title', therefore I'm staying at welterweight," said Hearn.

"This was all so he could fight Errol Spence, before the Khan fight looked possible.

"Khan's a big name, has a high profile. There are other options for him as there are for Brook."