Carl Frampton secured the WBA world featherweight title in New York with a stunning triumph over Leo Santa Cruz on one of the greatest nights in Irish fighting history.

Frampton delivered a masterclass of tactical tenacity in a raucous Barclays Center as Brooklyn turned into Belfast.

The 29-year-old's majority decision triumph sees him claim the belt his mentor Barry McGuigan held 30 years ago and in the process become only the second Irish fighter to beome a two-weight champion of the world.

So much credit, however, has to go to another McGuigan, Frampton's trainer and Barry's son, Shane.

Santa Cruz shaped as one of the most daunting prospects in prizefighting today, undefeated as a professional. And with a quite brilliant gameplan executed to perfection by his fighter, McGuigan Jr cracked the Santa Cruz code with the judges scoring the fight 116-112, 117-111, 114-114.

"It’s a dream come true," said the new champion. "I had the dream of winning a world title and I won it, but I never thought I’d win in two divisions. It was a tough fight, I wanted it to be a tough fight because I wanted a fight the people could remember. I respect him a lot. He was a true warrior." 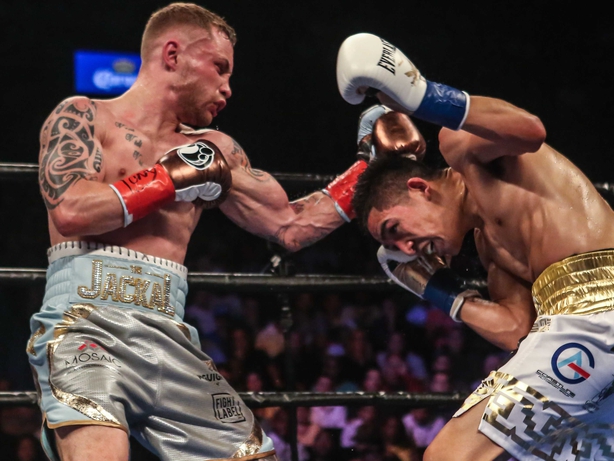 An instant classic and certain fight of the year contender, it wasn't without its hairy moments for the challenger as the champion refused to buckle in spite of being caught with some crushing shots from the Jackal.

But Frampton's footwork was supreme, his range was spot on and in landing the cleaner, crisper shots from the off, the decision could only go his way.

Frampton had expected as many as 1200 fight fans to make the trip across the Atlantic for his first primetime fight Stateside.

The green and white army made their voices heard as the atmosphere really crackled, the Jackal entering the arena with Irish flags, north and south, flying.

The 29-year-old was climbing through the ropes as underdog for the first time in his professional life.

He had promised to upset the odds; from the off he busily set about doing just that.

Santa Cruz stung him with an early left but Frampton soon showed all the benefits of an intense month-long camp here in New York. He got in and out landing plenty and shaded the opener.

"I wanted it to be a tough fight because I wanted a fight the people could remember."

The second stanza was where things got really interesting. The fight now well on its way to warming up, Frampton landed the shot of the fight, a crushing left hook that sent Santa Cruz staggering back on the canvas.

The third and fourth went his way too as he continually disrupted the vaunted rhythm of the younger rival.

McGuigan Sr was throwing every shot himself ringside, with Rory McIlory and Paul McGinley nearby enthralled.

The fifth round was perhaps the cagiest of the fight as everyone tried to catch a breath in the Brooklyn air.

As was bound to happen, Santa Cruz found his gear in the middle rounds and ate into Frampton's lead but the Jackal continually responded - in particular with late lefts that pierced through in back-to-back rounds.

Amateur scorecards had Frampton at the very least a couple of rounds clear entering the tenth and while he began to tighten up in stages, he was still finding the mark with fresh flurries.

A mistake would have been oh so costly and in the 11th he walked into a massive right from Santa Cruz. But he strode on, legs never buckling, standing tall in an utterly sensational final round.

Tension hung over the cavernous arena while the world awaited the scorecards.

But justice was served.

“I had a good game plan," said Frampton as he hinted at an immediate rematch with Santa Cruz, a mouth-watering prospect after this classic.

"Shane was an unbelievable coach. He told me every time I came back into the corner that we could win this a lot easier. But I won it with my heart, not with my head and I got my hand raised."

There had been joy earlier in the evening for Team Cyclone's other two charges when Conrad Cummings and Josh Taylor both emerged triumphant.

Tyrone middleweight Cummings ran his record to 10-0-1 with a gritty, hugely impressive unanimous victory over Dante Moore, while Taylor was all class in a second-round stoppage over Evincii Dixon, the Scotsman's record a perfect 6-0.

But this most perfect night wasn't complete until Shane McGuigan raised Frampton aloft and the green and white hordes saluted a champion for whom the sky truly is the limit.