Katie Taylor has qualified for the Rio Olympics after winning her quarter-final against Mexico's Victoria Torres at the World Championships in the Kazakh capital of Astana.

The London 2012 gold medallist is now guaranteed a bronze medal at least and the win means she has secured a place in Brazil where she will defend her lightweight title.

Taylor, who is looking for her sixth world title in a row, won on a unanimous points decision, taking each round 10-9.

The Bray boxer had too much skill and movement for the aggressive Mexican and will now face a semi-final against France's Estelle Mossely, who beat Azerbaijan's Yana Alekseevna, the fighter who defeated Taylor at the European Olympic qualifiers in April.

Taylor is the second Irish boxer to qualify for Thursday's semi-finals, joining Kellie Harrington, who won her bout earlier in the day.

Speaking after the fight, Taylor told RTÉ Sport: "It's a dream come true, everyone knows how much the Olympic Games mean to me and to have a chance to defend my title is an absolute honour."

With qualification issues put to bed, she admitted "It's definitely a weight off my shoulders.

"It didn't happen for me last month and it was a big disappointment for myself and the team, so it's great to be on the team now, to book my place in Rio with the rest of the lads."

Once affairs in Astana are put to bed, thoughts will inevitably turn to Rio, with the Bray woman hopeful of a successful trip.

"We're going to have some team in Rio and I think we're going to come home with a few gold medals," she added.

Taylor also praised team-mate Harrington, who set the standard this morning by reaching her semi-final.

"It's great to see so many Irish boxers boxing so well this week. I have company in the medal stages, which is fantastic. She is a huge talent and there’s plenty more to come from all the female boxers." 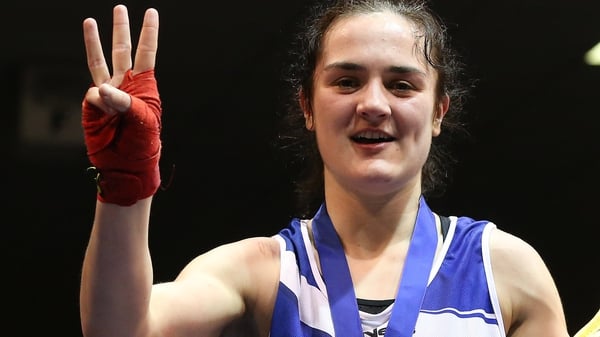