Amir Khan has insisted he would not be interested in fighting Floyd Mayweather if the American makes his expected return from retirement, even if he defeats Saul Alvarez to win the WBC middleweight title.

He challenges Mexico's defending champion 'Canelo' Alvarez on Saturday at Las Vegas' new T-Mobile Arena when he is such an underdog that victory would be among the greatest ever by a British fighter.

Mayweather has this week attracted significant attention since hinting at plans for a comeback and speaking of talks with American television networks CBS and Showtime, and if Khan were to hold a middleweight title where the 39-year-old is yet to fight, the potential money involved would be likely to get Mayweather's attention.

Asked if he planned to pursue the former five-weight world champion in the event of defeating Alvarez both on Saturday and after the Mexican had exercised his rematch clause, however, Khan said: "Do I want to fight Floyd Mayweather with all the messing around he's given me?

"Floyd's probably missing not having his picture on the MGM. He must see my picture and Canelo's picture and think, 'people have forgotten about me'. As soon as you say you're retired, we do forget about the people who say that.

"Mayweather's feeling that now, he's feeling like no one's talking about him, that he's old news, and maybe that's why he's trying to get everyone supporting him again by saying 'I want to make a comeback'. Whatever Mayweather says, let him say it."

It was when Khan's very public pursuits of Mayweather and Manny Pacquiao failed that the advice he was receiving was questioned.

The team guiding his career, including father Shah, was criticised when it stalled during that period but they have since delivered the Alvarez fight, which Khan believes vindicates the faith he has shown in them.

"If I look at my career financially, I think it's one of the best careers any fighter's had," said the 29-year-old. "I could stop now and I'd be very happy with my whole career. Boxing's a business, and I've got a great team around me who have been looking after me in that sense.

"My team's done a great job with me, they've put me in the right direction. I've been around since 2004 in the Olympics. We're still going strong now in 2016: my family have been great, my team's been amazing, they've kept me on the right track.

Khan revealed that he is using Leicester City’s shock Premier League title triumph as inspiration ahead of the biggest fight of his life.

The 29-year-old star is moving up two-weight divisions to take on formidable middleweight world champion Alvarez  but Khan insists he is using the fairytale victory of the East Midlands side as proof that the underdog can prevail.

“I’m seen as the underdog in this fight against Canelo but I feel this is the year of the underdog. What Leicester City have achieved is absolutely amazing. You would have been called crazy if you thought that Leicester would win the title at the start of the season – it’s such an inspiring story,” he said.

“I’m definitely going to use that to help me because it shows that even though people say you have no chance what really matters is how you perform on the pitch, or in the boxing ring in my case.

“I’m ready to shock the world and beat Canelo even if some may have written off my chances. I know I’m ready for this fight and want to get in the ring right now." 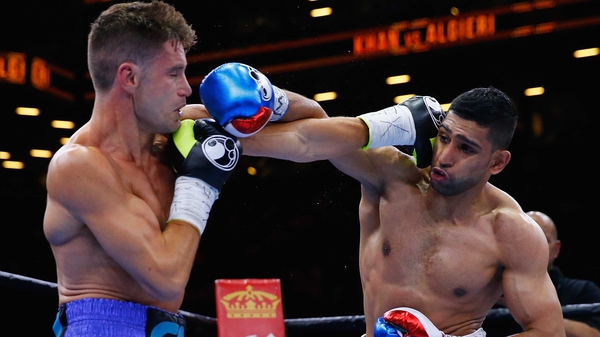 Amir Khan and Saul Alvarez to meet in May