Saul Alvarez has warned Amir Khan he will be wasting his time if he attempts to replicate Floyd Mayweather's tactics when they fight in Las Vegas for the WBC middleweight title on 7 May.

The Mexican was widely considered Mayweather's biggest threat - even more so than Manny Pacquiao - when the two fought in 2013 and when, despite Alvarez's size advantage, the American produced one of his finest performances to classily negate his strengths and secure a one-sided victory.

Alvarez is similarly expected to significantly out-weigh Khan on fight night, despite the catchweight of 155lbs, but given it has been noted the 29-year-old is considerably faster than Alvarez and that the Mexican can struggle with mobile opponents, the defending champion insists he has improved to the extent relying solely on out-boxing him will no longer work.

"He might try to do that but I'm ready for it now," said Alvarez, 25, who turned professional at only 15 and who since losing to Mayweather has particularly impressed in overcoming difficult tests against Erislandy Lara and Miguel Cotto.

"I'm a fighter at a different level now, have faced pretty much every style, so I'm capable of fighting against someone who can utilise that style.

"I didn't have too many amateur fights. I made my debut as a professional at 15, so it's prepared me very, very well, I've had many tests, throughout my career, but thank God, I've passed those and that's what's got me to where I'm at now."

That Alvarez has been selected to be the first to headline at Vegas' new 20,000 capacity T-Mobile arena, and on Cinco de Mayo weekend - the popular Mexican holiday - is testament to his profile as perhaps the sport's biggest attraction after Mayweather and Pacquiao.

His promoter Oscar De La Hoya, who preceded those two names as the world's highest-profile fighter, has long spoken of Alvarez as their successor, and the Mexican said: "It's a big responsibility and it's an honour for me to represent Mexico on these dates.

"It's not really pressure, it's just a responsibility, an honour. But a lot of people don't realise what goes into it, what I've sacrificed, to get to this point. All the sacrifice and all the hard work.

"It's a big responsibility but it motivates me at the same time to be able to fight for my country." 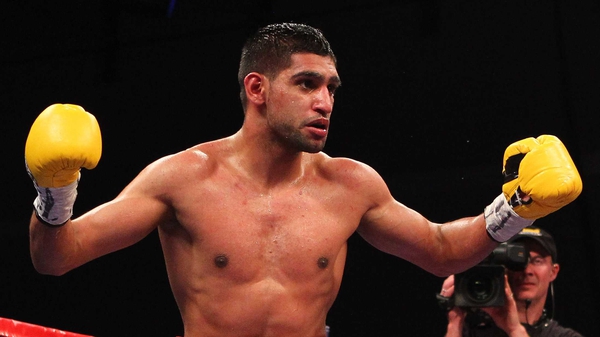