Ireland have never before claimed three medals at one worlds, but Ward followed the lead of Michael Conlan and Michael O’Reilly, who both claimed wins earlier on Saturday to secure bronze at the least – although there was disappointment for Belfast light-flyweight Brendan Irvine.

Conlan and O’Reilly will be in semi-final action on Sunday, while Ward will fight in the last four on Monday.

Ward, who boxes in the semi-finals against Elshod Rasulov of Uzbekistan, recorded a 3-0 unanimous deicison win over Baudhaliavets - an opponent the Moate light-heavyweight previously defeated on the way to European Championship gold during the summer.

“I feel grand,” said Ward after the fight. “I knew it was going to be hard because I boxed him in the European Championships and I knew he was a tough guy.

“Now that I have two fights under my belt I feel a lot better. I’m nine minutes away from the Olympic Games,” added Ward, who will qualify for Rio with a win over Rasulov tomorrow and is already guaranteed a second World medal having won bronze at the competition in 2013.

O’Reilly’s Olympic prospects are more complicated and it looks likely that he will have to secure a top-three finish in the middleweight division, either by reaching the final or winning a third-placed box-off.

O’Reilly’s fellow semi-finalist Cuban Arien Lopez - who is on the other side of the draw to the Irishman - has already qualified for the Olympics via the World Series of Boxing - which means the Irishman looked set to book an early flight to Rio, but convoluted AIBA rules means Olympic spots are not yet finalised. However, if the Portlaoise native wins his last-four fight today, he will definitely qualify for Rio.

However, if the Portlaoise native wins his last-four fight today, he will definitely qualify for Rio.

O’Reilly boxed fantastically in a close fight against the reigning world champ, with the Portlaoise middleweight using his fancy footwork as the basis for a hit-and-move performance.

“I thought it was a very tough fight, I knew it would be a tough fight going in,” said O’Reilly. “He’s the current world champion and he’s a boxer so he likes to make you miss. I knew what I had to do – play a game of cat and mouse and make him feint, make him throw first and that’s what he kept doing,” added the Portlaoise man, who meets Uzbek prodigy Bektemir Melikuziev in the last four on Sunday.

Team captain Conlan was back to his best in his semi-final win over European Games bronze medallist Aliyev after looking slightly rusty in his opening bout on Thursday night.

The Belfast native dominated his bout en route to a 30-27 win on all three cards and will meet Dzmitry of Belarus in the last four on Sunday.

“It was a good fight today, quite handy and I thought it was going to be a lot tougher,” said Conlan. “We just had the right tactics today and it was an easy enough fight. I felt in control and I wasn’t worried at all in there.”

There was disappointment for Irvine, however, as he lost a 3-0 unanimous decision to Joahnys Argilagos.

Belfast native Irvine beat the Cuban in youth competition last year, but he struggled to get through the tight guard of his opponent in a competitive fight. Argilagos was justifiably awarded a 30-27, 30-27, 29-28 win.

“It was a tough fight from the first bell and I knew it was going to be all-action because obviously he’s a Cuban and he was world champion at one stage,” said Irvine. “I fought him a while ago and he knew I was going to be coming to bring it, but unfortunately I didn’t have the luck today.” 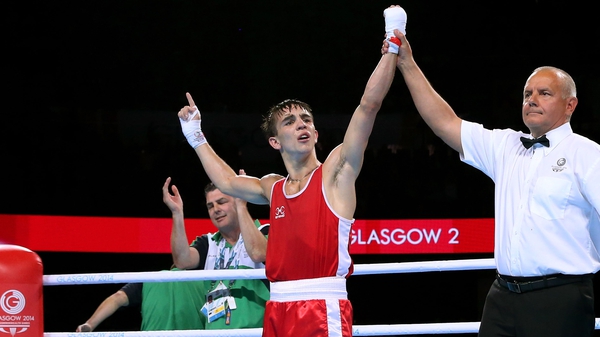 Michael Conlan, Brendan Irvine and Michael O'Reilly next up in Doha