Conlan defeated Denmark's Frederik Jensen (30-27, 30-27, 30-27) in the tournament's quarter-finals to advance to the last four and guarantee himself a bronze medal for his efforts.

Medal in the bag, onto the next one!!! Box Friday in the semis against Italy, looking forward to getting to another win on my way to #Gold

Speaking to RTÉ Sport post-fight, Conlan revealed that he was happy to get the unanimous verdict, but not with his overall performance in the ring, stating that he felt he gave the Dane too much respect, which prevented the Belfast boxer from performing in the manner that he wished.

Walsh used his superior height and reach well in the first round to fend off his smaller opponent, who wanted to keep the fight in close.

The second round saw Nyeki come forward aggressively at Walsh, landing several successful shots, while Dean tried to pick off the Hungarian on the move. However, a superb final round from Walsh landed a unanimous victory for the Wexford pugilist.

Ward defeated Belarussian Mikhail Dauhaliavets for a place in the last-four of the light-heavyweight competition on a score of 30-27, 29-28,29-28.

The 2011 European Elite champion will now meet Croatia’s No 1 seed Hrvoje Sep in the light-heavyweight semi-final on Friday.

Nolan bowed out of the tournament this afternoon after losing out on a unanimous decision to Belarusian welter Pavel Kastramin – 29-28,29-28,29-28.

The Wexford man, who beat the top seed in the previous round, was strong in the first two rounds but ran out of steam in the third,

However, if Kastramin gets to the final, it will mean Nolan qualifies for the World Championships regardless as the semi-finalists and quarter-finalists who lose to the eventual finalists all qualify.

Thursday is a rest day at the European Championships.

The semi-finals and finals will be decided on Friday and Saturday. 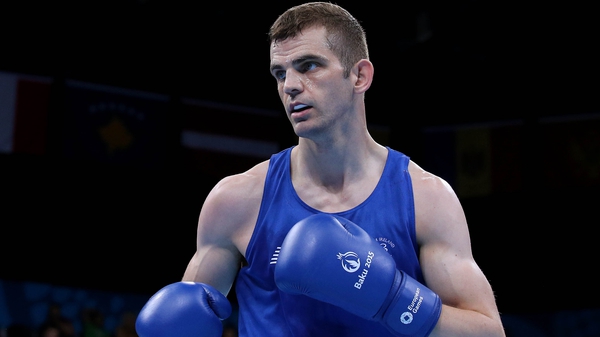