Irving will go against Russia's Bator Sagaluev in the decider and Walsh feels the Belfast man has what it takes to claim the top prize at Baku 2015.

Walsh told RTÉ Sport: “The young lad has been outstanding. He went out against the Ukrainian [Dmytro Zamotayev] who was champion at underage level and won the second round and blasted him away in the third round.

“It was a performance that was way beyond his years and maturity.

“His condition is fantastic and his ring skill is tremendous. His opponent was strong in the first round of all his contests. And the plan was to push him to the pin of his collar in the first round and it was a very close first round, we could have knicked it ourselves.

“We knew the other guy was gasping as he went back to his seat and we came out and pushed him in the second round.

“He’s absolutely thrilled. Afterwards he said I’m going to the changing room, I’m going to cool down. I’ve got a fight tomorrow night.

“That was his focus. He said I want to win that gold medal. He got his priorities right. He got his recovery shake in, did his cool down, and then went and spoke to the media."

Irish middleweight Michael O’Reilly will fight in the semi-finals in Baku on Friday against Russia's Maxim Koptyakov for a place in the final of his weight division and Walsh sung the praises of the fighter following his last-eight victory over Slovenia's Aljaz Venko.

“He was in total control. He hasn’t really got out of second gear although he will have to," said Walsh.

“He has all the ability to go all the way and be an Olympian. We just need to sort out the lifestyle around it. But he definitely has the talent and the heart. He never gives up.”

Darren O’Neill was not so fortunate in his heavyweight clash with Gevorg Manukian of Ukraine, losing on a split decision, a decision that many felt was contentious, including Walsh.

World, Olympic and European champion Katie Taylor eased into the last four with victory over Ida Lundblad and the Irish boxing boss said he expects her to do what she does best and win her semi-final clash with local Azeri pugilist Yana Alekseevna.

Walsh said: “She was ultra impressive today. My God, she gave an exhibition. She just couldn’t hit her. Tomorrow will be difficult because it’s the local girl but Katie has all the tools to beat her." 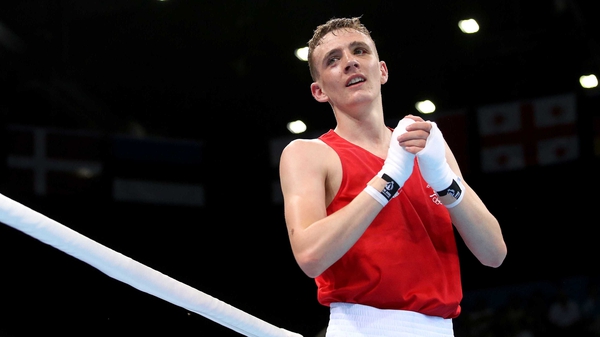