Amir Khan insists he is focused entirely on the task at hand as he prepares to take on Chris Algieri in New York on Friday night.

Khan has been tipped by many to be the next opponent for pound-for-pound king Floyd Mayweather since the undefeated welterweight beat Manny Pacquiao earlier this month.

The Bolton fighter believed he had a fight lined up with Mayweather last year only for the American to take on Marcos Maidana and then hand the Argentinian a rematch before facing Pacquiao.

That left Khan inactive for over 12 months and the former two-time world champion insists he is thinking only about Algieri.

"I'm focused on Chris Algieri," he said. "I don't want to look past  this fight, this is going to be a tough fight for me.

"I've made that mistake before in boxing, when you look past fights, but I ain't looking past this fight.

"Everywhere I go, people ask me, 'what about Mayweather? What about Pacquiao?' I'm not looking at them guys.

"I've got Chris Algieri, there's no point me looking at Mayweather, looking past this fight, because that fight might never happen."

He added: "I didn't want to speak to Floyd's team or anyone and I respect my own team and there is also Al Haymon who also looks after Floyd.

"I've not spoken to anyone from Floyd's team or from Pacquiao's team."

Khan comes into the bout on the back of four straight wins under trainer Virgil Hunter.

Some were predicting Khan was a spent force after back-to-back defeats to Lamont Peterson and Danny Garcia prompted an ending of his partnership with Pacquiao's renowned trainer Freddie Roach.

But victories over Carlos Molina, Julio Diaz, Luis Collazo and Devon Alexander followed and Khan has given much of the credit to Hunter.

"I was with a trainer before who maybe wasn't teaching me the defensive side of boxing," he said. "I needed to work on a few things and improve as a fighter and being under Virgil, he's done that for me.

"He's made me a better fighter, he's made me understand the sport of boxing and he's taught me the things I needed to be taught.

"Working on my technique, my skills and also when to punch at the right time and when to throw the right punches, the defensive side of boxing, knowing when to defend."

Algieri comes into the bout on the back of his first loss in 21 fights when he lost a wide unanimous points decision to Pacquiao after being knocked down six times.

The local boy has since brought in John David Jackson as his head trainer and he believes he is much changed from the man convincingly beaten in November.

"Working down in Florida with John David Jackson really refreshed a lot of things in boxing for me," he said. "I got to see new things and try new things. I learned a lot."

He added: "So many different situations came to light in that experience (the Pacquiao fight).

"Once you've been in with a guy like Pacquiao who is one of the two best fighters of our generation, everyone else is everyone else." 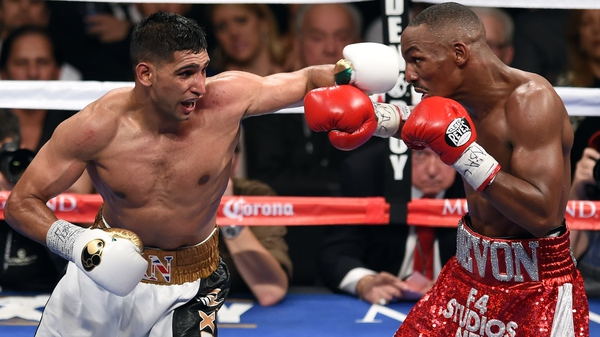