Matthew Macklin admitted that he might hang up his gloves after his shock loss to Argentinian Jorge Sebastian Heiland at the 3Arena on Saturday.

Macklin was a heavy favourite to win the WBC middleweight title eliminator but found himself worn down by his younger opponent (27) before being knocked out in the tenth round.

The 32-year-old is considering his next move but admits that with his chances of a fourth world title shot now remote, he may call it a day.

"I don't want to rush into any decision but I think if that was a couple of years ago, there was no way he would have beaten me," he told RTÉ Sport.

"Maybe it's the long career, tough fights catching up. I don't know. I'll have to speak to my trainer and a few close friends but it [retirement] is definitely something I'll have to consider now.

"13 years being a professional is a long career. I've had a lot of tough fights, and a lot of hard training camps as well. Even the last year, just [picking up] more injuries that you're working around and getting through...

"At 32 now, losing to a guy like that, that I don't feel would have been able to live with me a couple of years ago, you do have to ask yourself...

"I always said the day I lose to someone I wouldn't have lost to a couple of years previous, that I'd walk away and that would be it for me.

"But I don't want to make any rushed decisions. I'll analyse it properly in the days and weeks to come but it's definitely something I'll be considering."

"I always said the day I lose to someone I wouldn't have lost to a couple of years previous, that I'd walk away and that would be it for me."

Macklin (31 wins 6 defeats) said that he had felt confident going into the fight but just couldn't match Heiland's (25-4) intensity on the night.

"I felt good in training coming up to the fight," he said. "I started well but it was a fast-paced fight and it suited him really, the younger, fresher man.

"I was struggling with the pace. Early on I was okay with it but I knew the pace was probably unsustainable.

"But he was piling on the pressure so I had to match him and go with it, otherwise he would have run away with the fight on the scorecards.

"The proof is in the pudding. When you're in training camp, you feel good and you're hitting times, sparring well, you feel confident but you don't really know until the night itself.

"Normally I could dig down and find another gear but I wasn't able to.

"I just couldn't find the energy that one time came easy. Maybe it's an age, miles-on-the clock thing."

Macklin didn't rule out the possibility of a meeting with fellow Irish middleweight Andy Lee, who fights Matt Korborov for the WBO title on 13 December, but suggested that without the chance to win a belt he might no longer have the motivation.

"We'll see what happens," he said. "That was a world title eliminator [against Heiland]. I could have taken easier fights but I wanted to become world champion. Now that looks very unlikely.

"At this stage of my career that's what I was still fighting for but I don't want to rush into a decision as you can feel very raw the days after a fight. I'll leave it to the New Year to make a decision but it [fighting Lee] probably looks unlikely at this stage. " 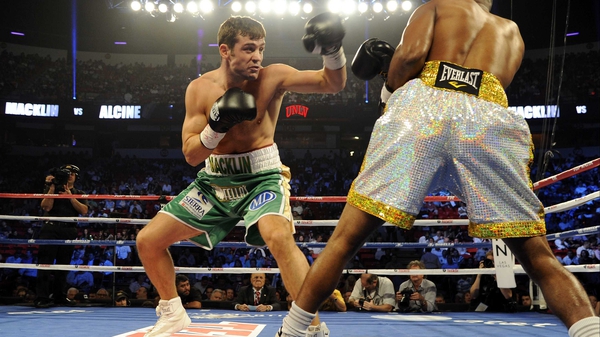