Matthew Macklin is certain he and fellow Irishman Andy Lee will finally square up in the ring next year, but first the former European middleweight champion has to take care of business when he faces Jorge Sebastian Heiland in a WBC world middleweight title eliminator clash in Dublin next month.

Speaking to RTÉ Sport, 32-year-old Macklin said a showdown with Limerick southpaw Lee was not dependent on the outcome of Lee’s fight against Korborov.

“The time’s getting a lot closer for the fight needing to happen. He’s fighting Korborov for the world title in December and I’m bringing big-time boxing back to Ireland here at the 3Arena.

“So if Lee wins, yes we’ll fight, and if he doesn’t win then it is still a big fight, so I think the time’s getting close.

“I think early next year or the middle of next year the fight will happen.”

The immediate focus though is the challenge of Argentine southpaw Heiland, which Macklin concedes is a win-or-bust bout.

“This is it now. If I was to lose to someone like Heiland at this stage of my career that would be it for me.

“But I’m not even contemplating retirement because I’m fully sure, fully confident of winning and moving on to another crack at a world title.

“There’s still a few chapters left in this story.”

Macklin will have to do without his trainer Jamie Moore against Heiland as the Englishman is still recovering from being shot twice in the legs in Marbella, Spain, during the summer.

Manchester-based Macklin has turned to his former trainer Joe Gallagher for the Heiland fight, which had originally been scheduled for 30 August but was postponed following Moore’s shooting.

Macklin is confident Moore will be back his corner by the end of the year.

“I talk to him on daily basis and he’s making a fast recovery,” said Macklin.

“It’s a long process but by Christmas or early next year he’ll be grand.

“It was a case of wrong place, wrong time, it was just one of those mad situations. It was unlucky it happened but he was lucky in that he’ll make a full recovery.”

He expects Heiland, 27, will be a tough challenger who will view Macklin as a prized scalp.

“He’s busy, gutsy, game and has a real love for the fight and plenty of Latino spirit in him and throws a lot of punches.

“He’s probably in his prime as well physicality wise and this is a massive opportunity for him.

“If he beats me, I’m one of the top five or top ten middleweight contenders in the world and have been for the last five or six years so for him beat me it’d be a huge scalp for him, so he’ll be bringing his ‘A’ game.”

A 6,000 sell-out crowd is expected on the night; the card is also expected to feature a first home bout as a professional for former Olympic silver medallist John Joe Nevin. 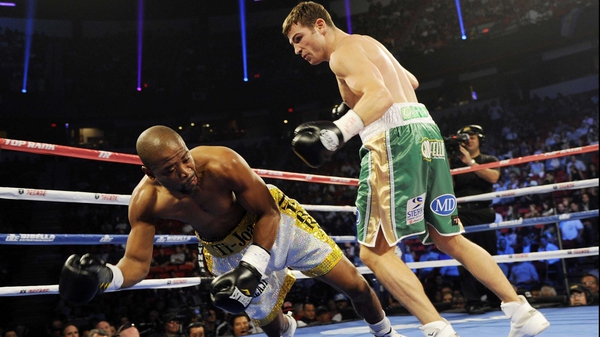