The Kilkenny southpaw, who stopped Derek Duhig in the semi-finals last weekend, meets Michael O'Reilly, who claimed silver for at the 2011 European Youth Championships in Dublin, in the middleweight final.

O'Reilly (Portlaoise BC) beat Christy Joyce on a unanimous decision in the other last-four clash to book his ticket into his first Elite final.

O'Neill, who captained Team Ireland at the London Olympics two years after he won silver at the European Championships in Moscow, will be appearing in his eighth Elite final.

He lost two of those finals to Kenneth Egan and another to Darren Sutherland. He has won four. However, the Kilkenny southpaw (Paulstown BC) has dismissed talk of a 'high five'.

"I'll be aiming for one title, just the one. I'm taking it one final at the time and not thinking about the five, he said.

"I'm happy to be back in the ring and back down at middleweight for the first time in a year.

"It's great to have had a few fights going in. Last year I had nothing between the Olympics and the nationals.

O’Neill crashed out of the 2013 Elite Championships at the quarter-final stage to Jason Quigley on a count back after a 13-13 tie.

Quigley, who did not enter the Championships this year, went on to win his first Irish Elite title.

The podium finishes in Minsk and Central Asia rocketed the Donegal fighter from relative obscurity to No 2 in the AIBA World rankings.

The medal haul also attracted the attentions of a number of promoters and Quigley is reportedly on the verge of switching to the pro ranks, although he has also been made an offer to sign with AIBA Pro Boxing (APB).

O’Neill, who is also a primary school teacher, admitted that he hadn’t been firing on all cylinders against Quigley.

"Last year, against Jason Quigley, it took me two and a half rounds to get going. I think everybody could see the rust," he said.

"I was only at about 65%, but that was last year and I'm not going to dwell on that.

"It was important to get back in and I got a few fights under my belt in the last few months.

"Whether I was at full fitness for them or not, I thought it was better to get in rather than sit on the side-line trying to get back to full fitness first.

"I'm grateful I had them, and I'm looking for to the final. Michael [O'Reilly] is a good boy; he's very, very awkward. I know it's not going to be an easy fight.

"Still, if I can impose myself on him, I should be able to use my experience.

"Middleweight has been our best weight throughout the years.

"Middleweight has been our best weight throughout the years" - Darren O'Neill

"Kenny Egan was there against me for the first few years, the next year I broke a thumb the Friday before the championships started, and then I had Darren Sutherland against me.

"Last year wasn't great. I had a torn cartilage in my shoulder and, outside the ring, with not being working and the comedown from the Olympics, I just wasn't enjoying my boxing. I wasn't enjoying training.

"I took a month or two off. There wasn't any squad training at the time. I trained back at home with my Dad and my brother and I began enjoying it again.

"I was back where I was when I was a kid, doing it because I love it, and that's why I'm here now.

"Having a job now is a great help. Over the years, whenever I had difficulty with the job situation, I think people could see that my performances dipped.

"You don't need an external distraction and now that I don't have it “I'm enjoying things a lot more,” concluded the former AIBA World No 3 ranked middleweight. 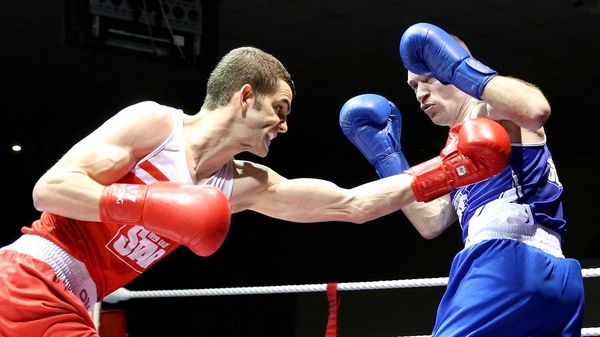