Carl Frampton is one fight away from a world title shot after his WBC eliminator bout against Mexico’s Hugo Cazares was confirmed for Belfast on Friday 4 April.

If Barry McGuigan’s protege can get the better of Cazares (35), a two-time former world-champion, at the Odyssey arena, he will become the mandatory challenger to Leo Santa Cruz’s WBC super-banamweight belt.

“I can’t wait to get back in front of the amazing Belfast crowd and secure my shot at the WBC World title,” said Frampton, unbeaten in 17 professional bouts (12 KO).

“I have progressed so much in the last twelve months both in the boxing ring and out of it, and I believe that the next 12 months will bring me even more success and more importantly the World title.

“It’s fantastic to be boxing at home for the fourth consecutive time and to be fighting a former two-weight World Champion in a final eliminator for the World title.”

Manager McGuigan warned that beating Cazares was no foregone conclusion, however.

“In Hugo Cazares, Carl faces a very experienced man who has been there and done It,” he said.

“He has won World titles in two weight divisions, including winning his second away from home in Japan, so he is no stranger to partisan crowds.

“Carl will have to be at his best to beat this man and I believe he will, convincingly, and in doing so Carl will become the mandatory challenger to the WBC World Champion, Leo Santa Cruz.”

For his part, Cazares is confident that he can stop 'The Jackal' in his own back yard.

“April the fourth is my chance to put myself back on the World stage. I am a former champion and I have fought all over the World so going to Belfast is no problem for me,” said Cazares.

“Frampton is a very good fighter but no one can stand in my way on my journey back to a World title.”

Frampton’s big night comes the day before Ulster take on Saracens in their Heineken Cup quarter-final, and he is aiming to set up a perfect weekend for sports fans in the province.

“Hopefully I can set the tone with a big victory and it will be a successful weekend all-round for Belfast,” said the 26-year-old.“The whole city will be buzzing.” 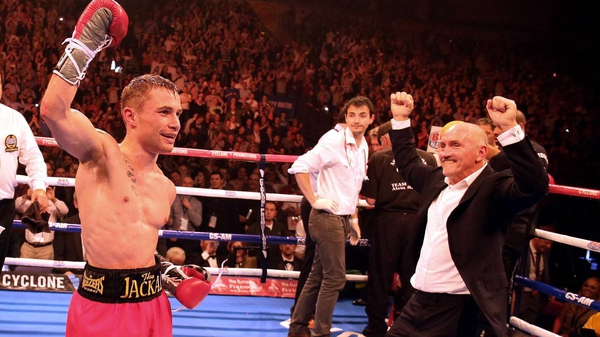