Matthew Macklin came up short once again in his bid to win a portion of the world middleweight crown after being brutally knocked out in the third round by the unbeaten WBA World 160lb champion Gennady Golovkin.

Macklin was defeated in previous title fights against Felix Sturm and Sergio Martinez in thrilling contests, but the Birmingham fighter was thoroughly outclassed by knockout specialist Golovkin at Foxwoods Resort, Mashantucket, Connecticut.

The Kazakh-based German hurt Macklin on several occasions before ending the contest in the third round with a savage left hook to Macklin's body for his 24th stoppage win in 27 fights.

"Without a shadow of a doubt, he's definitely the best kid I've ever fought," said Macklin, whose record falls to 29 wins with five defeats in 34 professional outings, on Sky Sports 1.

"I had a plan to exploit his weakness, which was his lack of experience - he's only been 10 rounds once - but credit to him, he didn't even let me get into any kind of rhythm at all.

"He was patient, he was hard to hit clean, kept the pressure on, picked his punches well and that body shot took it out of me."

Macklin came into the bout convinced it would be third time lucky in world title fights after a controversial points loss to Sturm and a valiant 11th-round stoppage defeat against middleweight kingpin Martinez.

The 31-year-old thought he would be Golovkin's toughest test to date, but the man nicknamed GGG proved he is the real deal with a clinical performance.

Golovkin, also 31, came into this bout on the back of 13 consecutive stoppage wins and he carried understandable confidence into the ring.

He settled to his task midway through the opening round and his first meaningful right hand seemed to unsteady Macklin, who tumbled into the ropes shortly after following a tangle of legs - with his opponent sportingly allowing the Anglo-Irish fighter time to regain his balance.

That was to prove Golovkin's only act of charity in the ring, however, as he opened a cut below Macklin's right eye with another fearsome right in the second.

Recognising he was being outclassed, Macklin decided to open up a little more in the third round, although that only served to stiffen Golovkin's resolve.

The champion forced his opponent into the ropes before delivering a fierce left to the body which left Macklin writhing around in agony long after referee Eddie Cotton had ended the contest at one minute, 21 seconds into the third round. 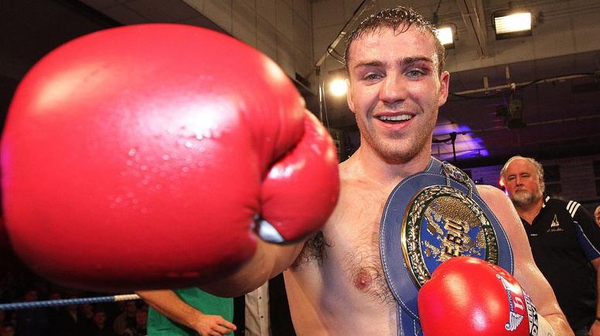