Ireland's senior men’s team fell to 97-70 defeat to Austria in the second game of their FIBA EuroBasket 2025 pre-qualifiers campaign.

Badmus opened the scoring with a layup in the first 30 seconds to give Ireland an early lead. Austria, ranked 61st in the world and 46 places above Ireland, responded with five points in a row, but a Jordan Blount layup brought it level, at 5-5, with three and a half minutes gone.

Carroll was looking liveliest for Ireland in the opening quarter, he had a dunk and fadeaway jump shot to see Ireland trail 11-9 at the midway point in the quarter.

The first quarter highlight was a steal followed by a dunk from Lorcan Murphy, which reduced the deficit to 15-11.

Thomas Klepeisz was the dangerman for Austria, a three from the captain with a little over two minutes to go made it 21-11 to away side. He’d accumulated nine points at that stage and would have 11 by the end of the quarter.

Another big three from Guylain Mbemba and Marvin Ogunsipe layup had Austria 28-11 up.

Carroll missed his two free throws in the dying seconds of the quarter, but scooped up the rebound after the second to make a layup and it was 28-13 at the end of the quarter.

Ireland’s struggles at the basket in the first quarter were quickly forgotten with a strong second. After three and a half scoreless minutes in the quarter, Blount landed a three point jump shot, only for that to be wiped out almost immediately by Klepeisz, much to the visible frustration of Blount.

Ireland started to pick up a bit of steam, Flood’s three-point step back jump shot four and a half minutes in saw them trail 31-19.

Six minutes into the quarter Carroll downed a three, he followed it with a two-point jump shot, however Austria still led 39-29. A Badmus layup came soon after was greeted by a raucous response from the home crowd, who could sense a momentum shift.

Carroll was to the fore, he had four more points, followed by four from Flood to see Ireland trail by just a single point, 40-39. Austria responded with a dunk from Renato Poljak, who was fouled by Eoin Quigley on the way in, Poljak added the extras to make 43-39.

Ireland had the last say in the quarter, Brian Fitzpatrick’s layup saw Ireland trail 43-41 at half-time, having outscored their opponents 28-15 in the quarter.

Austria began the third with a big three Klepeisz, who was proving to be a formidable force to try and stop and would finish the game with 25 points. Flood matched it with little over two minutes gone in the quarter, Austria led 46-44.

Austria built a 10-point advantage, 56-46, by midway through the quarter, Bogic Vujosevic’s big three among their points.

Carroll got through some traffic to pick up a layup and reduce Austria’s lead to 56-48 with four minutes to go. It was all Austria after that, Erol Antonio Ersek went on an eight-point personal run, which included two three-point jump shots and Austria held a commanding 73-50 advantage going into the final quarter.

A shot-clock buzzer beating three from Badmus and a layup shortly after that made it 76-58 with two minutes gone in the final quarter, as Ireland pushed to try and close the gap.

Another three pointer from Badmus with a little over six minutes saw Ireland trail 78-63.

But Austria managed to hold off the attempted comeback, Blount’s three point jump shot in the final minute among the highlights in the closing stages, as Austria emerged 97-70 victors.

Ireland’s next Group A game is away against Switzerland on 24 February, followed by a home game against Cyprus three days later. 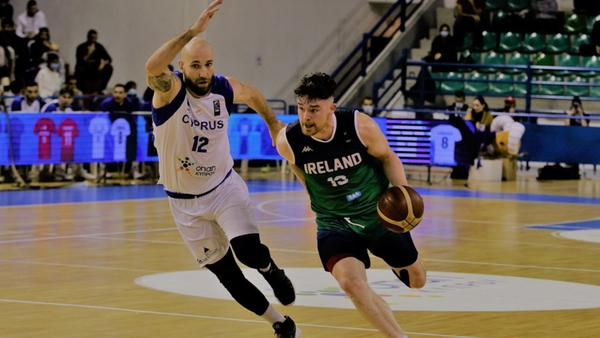