Steph Curry posted a career-high 62 points to lead the Golden State Warriors to a 137-122 victory over the Portland Trail Blazers.

Curry was locked in from the tip-off, exploding for 21 points in the first quarter and entering the half with a 31-point haul and a 66-54 Warriors lead.

Although Damian Lillard took it upon himself to try to bring Portland back into the contest, there was no stopping Curry's offensive barrage.

He went 18 for 31 from the field, including eight of 16 from beyond the arc, while Lillard finished with 32 points, four rebounds and four assists.

After dropping their first five games, the Washington Wizards picked up their second-straight win with a 123-122 upset victory over the Brooklyn Nets.

Bradley Beal led the way for Washington with 27 points and 10 rebounds, while Kyrie Irving and Kevin Durant combined for 58.

The loss moves Brooklyn outside the top eight in the Eastern Conference with four losses and three wins to start the season. 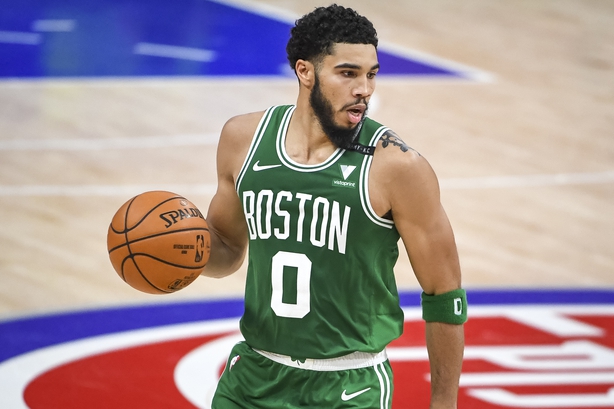 A late basket and stop by Jayson Tatum [above] propelled the Boston Celtics to a two-point win against the Detroit Pistons.

Tatum sunk a fallaway jumper to put the Celtics in front with 2.9 seconds left, before tying up Blake Griffin on the other end to seal the 122-120 victory.

Zach Lavine dropped 39 points to lead the Chicago Bulls over the Dallas Mavericks 118-108.

Coby White contributed 23 points and seven rebounds in the win, while Jalen Brunson led the way for Dallas with 31 in the absence of Luka Doncic.

The Los Angeles Clippers held off a late rally from the Phoenix Suns to nab their fifth win of the season 112-107.

A 39-point haul from Paul George was enough to get the Clippers over the line despite being outscored by 15 points in the second half.

The Los Angeles Lakers scored 31 points in the fourth quarter to overcome the Memphis Grizzlies 108-94.

And the Denver Nuggets' Nikola Jokic posted a triple-double on the way to a 124-109 rout of the Minnesota Timberwolves.