The NBA cancelled Wednesday's slate of play-off games after the Milwaukee Bucks boycotted their game against the Orlando Magic to protest a police shooting over the weekend in Wisconsin.

"We're tired of the killings and the injustice," Bucks guard George Hill told The Undefeated of Milwaukee's decision not to play.

The Bucks and Magic were scheduled to tip off shortly after 4pm local time but the Bucks did not take the court. After their boycott became official, the four other teams set to play in Game 5s on Wednesday weighed up the possibility of a boycott before the NBA postponed the games.

"The NBA and the National Basketball Players Association today announced that in light of the Milwaukee Bucks' decision to not take the floor today for Game 5 against the Orlando Magic, today's three games - Bucks vs Magic, Houston Rockets vs Oklahoma City Thunder and Los Angeles Lakers vs Portland Trail Blazers - have been postponed. Game 5 of each series will be rescheduled," the NBA announced.

The Athletic reported that NBA players scheduled a meeting for Wednesday night to determine their next steps, while NBA TV reported that some players are contemplating leaving the NBA bubble near Orlando.

As a show of solidarity, Major League Baseball team the Milwaukee Brewers refused to play their game against the Cincinnati Reds, who fully agreed with the boycott.

The Brewers came to the decision following a team meeting. 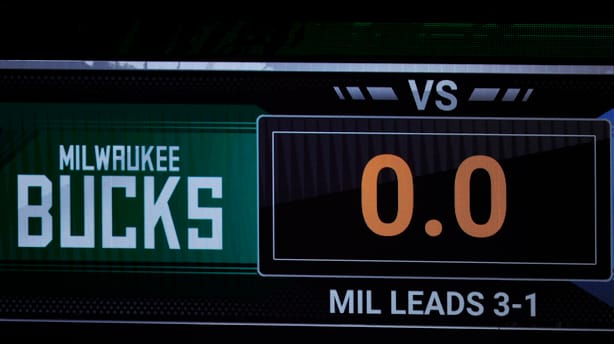 The Bucks refused to take the floor before warm-ups and remained in the locker room as the time for tip-off came and went.

While the Magic players were on the floor, ready to begin the next game of the Eastern Conference first-round series, NBA officials gathered at the Milwaukee locker room.

ESPN reported that NBA officials were there to inform the Bucks of the ramifications of not playing the game.

And in the locker room, the Bucks were trying to reach the Wisconsin attorney general, Josh Kaul, by phone, The Athletic said.

"The stand taken today by the players and (organisation) shows that we're fed up. Enough is enough. Change needs to happen. I'm incredibly proud of our guys and we stand 100% behind our players ready to assist and bring about real change."

The boycott is the Bucks' response to the shooting of Jacob Blake, a black man shot in the back by police officers Sunday in Kenosha, Wisconsin.

Video shows Blake trying to get into his automobile with an officer pulling Blake's white T-shirt, then firing several shots at close range into his back.

Blake's father, also named Jacob Blake, told ABC News that he was told his son is paralysed from the waist down.

The Orlando Magic issued a statement indicating the organisation's support for Milwaukee's decision.

"Today we stand united with the NBA Office, the National Basketball Players Association, the Milwaukee Bucks and the rest of the league condemning bigotry, racial injustice and the unwarranted use of violence by police against people of color," the statement read.