The Los Angeles Lakers returned to their pre-bubble ways in their game-two play-off clash with Portland, brushing aside the Trail Blazers 111-88.

The shooting troubles that had plagued the side since the NBA season restarted were mostly nowhere to be seen as Anthony Davis dominated Portland down low.

Davis shot almost 62% from the field as he finished with 31 points and 11 rebounds, while Lebron James had a relatively quiet night with 10 points, six rebounds and seven assists.

The Lakers also wrought the benefits of a locked-in defensive effort against Damian Lillard, holding him to just 18 points.

The Milwaukee Bucks also had an emphatic rebound from their game-one loss to the Orlando Magic, cruising to a 111-96 victory.

Giannis Antetokounmpo was at his menacing best, dominating at the rim to post 28 points and 20 rebounds.

He was ably supported by a 20-point effort from Brook Lopez.

Nikola Vucevic again led the way for the Magic, finishing with 32 points as the rest of the team struggled to get things going offensively. 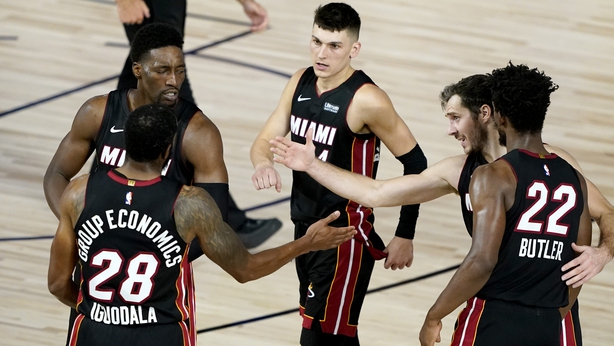 Meanwhile the Miami Heat improved to 2-0 in their series against Indiana, making the most of a second-quarter explosion to claim a 109-100 win over the Pacers.

Miami guards Duncan Robinson and Goran Dragic combined for 44 in the nine-point victory while Victor Oladipo was the sole Pacer to break the 20-point mark, finishing with 22.

And the Houston Rockets also made it 2-0 against the Oklahoma City Thunder, courtesy of a 111-98 win.