DCU Mercy were crowned the 2019/20 Basketball Ireland Women's Super League champions this afternoon as they ran out 81-58 point winners over Maree at DCU in the penultimate game of the season.

Mark Ingle’s charges were pushed all the way by the Galway outfit, and it was a stunning third quarter display from American Meredith Burkhall that ultimately put them on the road to glory.

"We came in today with a job to do. We know how good Maree are, they beat us in Galway and we knew it would be a really tough game.

"I’m just so happy to be holding the trophy now and to be finally able to say we’re league winners." 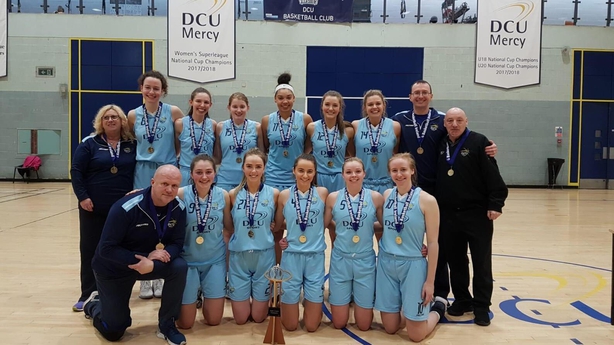 Elsewhere, Ambassador UCC Glanmire continued their fine run since losing their local derby game to Fr Mathews at the start of the month. An impressive display on the road against Pyrobel Killester saw Mark Scannell’s charges emerge 83-96 victors in an overtime thriller in Dublin.

Shrita Parker was exceptional again for the visitors, notching 31 in the contest, making it three games on the spin where the Virginia native netted over thirty.

The two other Cork teams were in derby action on Saturday evening, with Fr Mathews falling narrowly to local rivals Singleton Supervalu Brunell 71-72. The northside club came out strong in the first quarter, led by stalwart Danielle O’Leary (17), seeing Brunell take a six-point lead at the half.

The result sees Mathews drop to seventh in the table with Maxol WIT Wildcats capitalising by winning 80-54 in Kilkenny against Marble City Hawks. Jasmine Walker was excellent for Wildcats as usual, combining with Stephanie O’Shea to finish with 37 points between them.

Leixlip Amenities Liffey Celtics also remain in the hunt for play off positions as they saw off the challenge of IT Carlow Basketball 84-66 at home on Sunday afternoon.