Tributes to Kobe Bryant were paid across the NBA as eight games were played amid sombre atmospheres on the day of the former Los Angeles Lakers great's death, while celebrities around the globe also took the chance to remember the iconic player in a public way on social media.

Chants of 'Kobe, Kobe' resounded in most stadiums as players honoured the five-time championship winner and dealt with their own grief in various ways.

Bryant died in a helicopter crash alongside his 13-year-old daughter Gianna in California on Sunday morning.

Kyrie Irving opted to stand down from the Brooklyn Nets' match against the New York Knicks at Madison Square Garden, which like all other venues observed a minute's silence before the match.

The Knicks won 110-107, with Julius Randle leading the way with 22 points and 15 rebounds, while Spencer Dinwiddie made 23 for the Nets.

Pictures of Bryant were displayed on the large screens outside Madison Square Garden, the location of some of his finest moments. 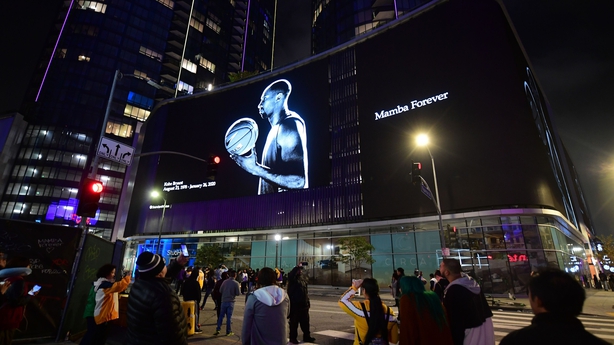 The Toronto Raptors and San Antonio Spurs each dribbled out the 24-second shot clock in their match, in honour of Bryant's second jersey number of 24, a gesture repeated in several other matches.

Pascal Siakam scored 35 points to lead Toronto to a narrow 110-106 away victory and a seventh straight win.
DeMar DeRozan and Derrick White had 14 each for the Spurs.

In Memphis, the Grizzlies won the opening tip-off and immediately took a 24-second shot clock violation.

The Phoenix Suns responded with their first possession by staying in the backcourt to incur an eight-second violation, a nod to the fact Bryant started his career wearing eight.

Laker Nation, the game of basketball & our city, will never be the same without Kobe. Cookie & I are praying for Vanessa, his beautiful daughters Natalia, Bianka & Capri, as well as his parents Joe & Pam & his sisters. We will always be here for the Bryant family. pic.twitter.com/WWxmtEAJqZ

The Grizzlies won 114-109, with Ja Morant scoring 14 of his 23 points in the last quarter to hold off the fast finishing Suns.

In Atlanta, the Hawks produced a rare win with a 152-133 defeat of the Washington Wizards, led by an inspired Trae Young's 45 points and 14 assists.

Young wore a number eight jersey for the first few seconds of the match, put a tribute to Bryant on his shoes, and looked up to the heavens several times to honour Bryant, his mentor and favourite player.

At the beginning of today's game, we shared a moment with the @Raptors to honor Kobe Bryant. pic.twitter.com/uHdYgUT0Vs

In other games, the Portland Trail Blazers won 139-129 at home to the Indiana Pacers, the New Orleans Pelicans beat the visiting Boston Celtics 123-108, the Los Angeles Clippers won 112-97 at the Orlando Magic and the Denver Nuggets won 117-110 at home to the Houston Rockets.

Bryant's impact on the game could be seen as stars from around the world made tributes on social media.

Kobe was a legend on the court and just getting started in what would have been just as meaningful a second act. To lose Gianna is even more heartbreaking to us as parents. Michelle and I send love and prayers to Vanessa and the entire Bryant family on an unthinkable day.

Golfer Tigers Woods said he only found out about his friend's death after finishing his final round at the Farmers Insurance Open at Torrey Pines.

The 15-time major winner, who is a life-long Lakers fan, told the PGA Tour: "It's a shocker to everyone. Unbelievably sad and one of the more tragic days...for me the reality is just setting in."

Asked what he remembers about Bryant, Woods added: "The fire. He burned so competitively hot and the desire to win. He brought it each and every night, on both ends of the floor. Not too many guys can say that throughout the NBA history."

Fans were quick to leave flowers and other tributes to Bryant outside the Lakers' arena the Staples Center on Sunday as well as Bryant's Mamba Sports Academy in Thousand Oaks.

Emotional tributes were held before the NFL's Pro Bowl in Orlando, while Paris St Germain forward Neymar made a '24' gesture with his hands after scoring against Lille in Ligue 1.