The Golden State Warriors beat the Cleveland Cavaliers 129-120 to win their second NBA championship in three seasons and cap a near-perfect run through the playoffs.

The Warriors, who beat Cleveland in the 2015 Finals only to lose to them last year after squandering a 3-1 series lead, went a record-setting 15-1 in the playoffs, their only loss coming in Game Four of the best-of-seven championship.

The win spelled redemption for the Warriors, who brought forward Kevin Durant over from the Oklahoma City Thunder last offseason to bolster their already high-powered offense.

Durant, who lost in his only previous Finals appearance, led the way for the Warriors with 39 points and was relieved after feeling pressure to deliver prior to the game.

"I couldn't sleep for two days," Durant, who was named the Finals MVP, said during an on-court interview. "I was anxious, I was jittery.

"I just wanted to lay it all out there. I put in work, I just had to trust in it. We were really good tonight."

"You have to tip your hat to Cleveland," he said.

"LeBron and Kyrie I've never seen nothing like them two before. But we prevailed, we're champions and it's amazing doing it on our home floor."

James had a game-high 41 points and Irving hit tough shots all night but defensive breakdowns by Cleveland led to easy baskets late in the game for the Warriors, igniting a deafening crowd. 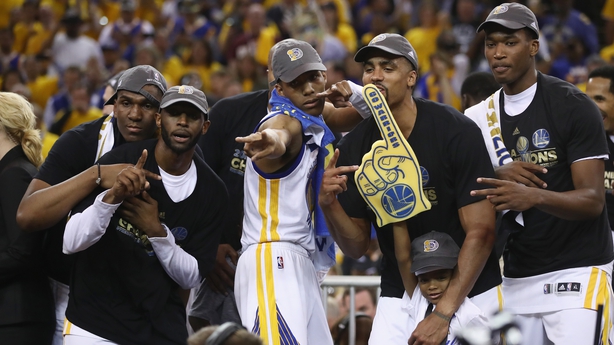 "We learned from everything we've been through," Warriors point guard Stephen Curry said during the trophy celebration. "Our perspective, being blessed to play on this stage three years in a row.

"To be back here and bring gold Larry (O'Brien) back home, I'm just excited to be a part of this group and accomplish something special. I'm ready to do it again."

An unprecedented third straight Finals clash between the Warriors and Cavaliers was hyped as the ultimate championship rubber match and expected to be the antidote for a postseason that had little in the way of drama.

But that idea fizzled fast when the Warriors opened with a pair of lopsided wins at home, fought back late to steal the next game in Cleveland and then, after dropping their first game of the postseason, closed out the series at home.

In the end, the Cavaliers simply did not have the requisite star power to topple the talent-laden Warriors, even with four-time league MVP James doing all he could to keep his team in it.

For James, already a three-times champion, the loss puts him in rare - but not ideal - company as only the fourth player to come up short in five NBA Finals.

Cleveland's inability to give the Warriors much of a fight has already sparked talk that James, who left the team in 2010 for Miami before returning four years later, could consider another move during 2018 free agency.