The Golden State Warriors moved into a commanding position in the NBA Finals with a 110-77 romp over the Cleveland Cavaliers on Sunday night in front of a delighted home crowd.

Draymond Green was the latest Warrior to shine as the team's All-Star backcourt of Stephen Curry and Klay Thompson was afforded another quiet game, the power forward scoring a game-high 28 points as Golden State opened a 2-0 lead in the best-of-seven series.

MVP Curry recorded 18 points and nine rebounds but played just 25 minutes and spent much of the night cheering from the bench while his team ran rampant against a lethargic and outclassed opposition.

"What we've done the last few years, everybody, every night has an impact," Curry said. "You don't know where it's going to come from any given night. That's why we're in this position."

Cavaliers talisman LeBron James finished with 19 points, nine assists and eight rebounds but did not play in the fourth quarter once the game was beyond Cleveland.

"They beat us pretty good tonight," James said. "We understand the moment we're in. It's not every year you get an opportunity to be in this situation. We have to bear down."

The Cavs return home to Cleveland for Game Three on Wednesday when they will try to make their first telling impact in what has been a disappointing mismatch to date.

The Cavaliers were supposed to be better prepared for a Finals rematch with the Warriors as they entered healthier and more talented than the hobbling team that lost 4-2 a year ago, but they have been destroyed in the opening two contests. 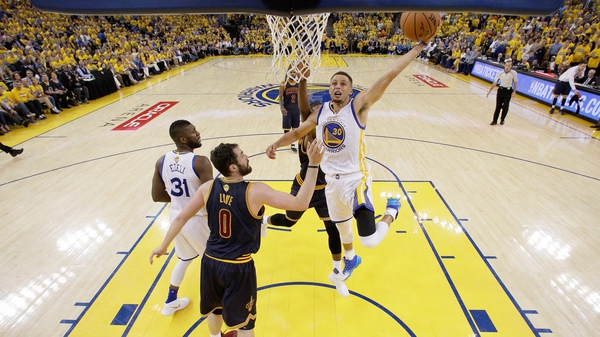