Team Montenotte toughed out their fifth Women’s National Cup victory with a 62-36 win over Killester.

Killester were in their first Cup final in nine years while Team Montenotte had the experience and an aggressive defence to see them come out on top.

It wasn’t a vintage final, but it was vintage Glanmire.

Both sides saw shots go astray in a cagey opening but Team Montenotte Hotel used their cup know-how to gain an advantage.

Niamh and Grainne Dwyer attacked the basket whenever they could, if only to draw the foul along the way - the two sisters were 4/4 from the line for the first quarter.

Grainne was the full of hustle on both ends of the court with Killester’s Robin Murphy the victim in defence – after two unsuccessful spin moves, the American tried a fade away in the face of the Tipp woman’s aggression.

It worked but Jessica Scannell’s three-pointer kept Glanmire in front. 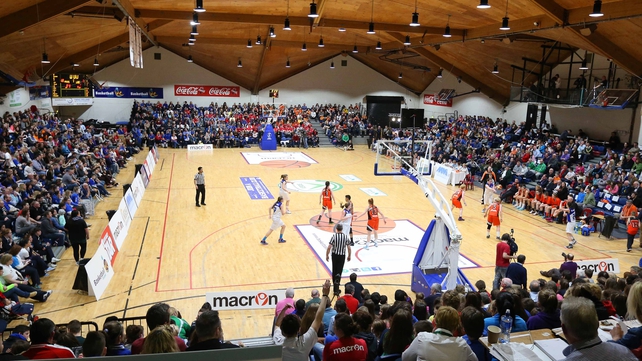 Killester’s nerves had settled and the shots started to drop soon after. Olivia Lee grew into the game while Rebecca Nagle and Mimi Clarke got off the mark with their threes.

The lead was Killester’s as Ali Maguire came in off the left wing for another three to make it 17-15 with six minutes to the half.

Mark Scannell’s post-match interviews all season have included the phrase “It was good to get 12 players on the floor”.

It turned out it was all in preparation for today. Amanda O’Regan and Casey Grace were sprung from the bench to regain their lead. A floater from Killester’s Amy Russell kept Glanmire’s lead to the minimum at the half.

For the players, it’s only a great Cup final if you win it. Both sides were happy to slug it out and the defences were largely on top.

Mimi Clarke hunted down a Niamh Dwyer break and made a clean swat on the lay-up.

Glanmire though were set up to steal. The turnovers started coming their way and the points followed when Marie Breen started cleaning up the possession from the rebound.

Her kick back to Niamh Dwyer for the three put Glanmire 11 points in front.

Scannell hit her second three soon into the final quarter and the lead was unassailable. It allowed Glanmire to freshen things up and bring injured captain Claire Rockall into the game.

Aggression. Skill. Offence coming from defence. Hallmarks of the Glanmire game. And big players stepping up. Grainne Dwyer was named MVP for the second cup final in a row.

“We knew if we could keep the score down, we’d win the game,” she said. “We kept them to 24 points in the first half. It all came from there.”