In early November, Killester were sitting on a record of one win and four losses in Basketball Ireland’s Women’s Premier League with an away fixture to unbeaten defending champions UL Huskies to look forward to.

Following their weekend win over Team Montenotte Hotel in Cork, they enter the Christmas break with a record of five wins and four losses, including road wins over two of the ‘big three’ in Huskies and Montenotte.

“Every win over one of the ‘big three’ teams gives us a lot of confidence but we are still figuring out exactly what type of team we are,” said Killester coach Mark Grennell.

“It wasn’t so long ago we were getting beaten by 30 points by these teams.”

Despite some naïve play late, that showed glimpses of their lack of maturity, Killester managed to hold on to their lead and earn a tremendous win on the road against one of the power houses of Irish women’s basketball.

Also in the Women’s Premier League at the weekend, DCU Mercy proved too strong for a gallant Liffey Celtics, as they were deserving winners by ten points on the road, grabbing them a share for first place in the league table alongside Huskies.

Meanwhile, in the Men’s Premier League, UCD Marian held off repeated Templeogue comebacks to earn their second win in as many weeks with a 78 to 59 victory.

The two December wins come after five straight losses in the months of October and November and lifts them away from the bottom two of Templeogue and SSE Renewables Moycullen.

“If we had lost this, in our home gym, it would have been devastating,” remarked UCD Marian head coach Ioannis Liapakis.

“We want to be part of that middle pack and not the bottom. Not having losing bonus points has really hurt us and if we lost tonight it could have been hard to catch Templeogue again.”

Saturday night’s game followed a definite pattern with UCD Marian repeatedly shooting ahead before being pulled back by Templeogue, leaving the result in doubt throughout.

In truth though, Marian were the better team and never trailed in the game, at times going up by more than 20 points.

The only other game from the weekend saw Belfast Star convincingly dispose of Dublin Inter 58 – 72.

Entering the game tied in the league table with 11 points apiece, Belfast Star’s road win over Inter moves the northerners into sole possession of fifth place.

Led by 20 points from Paul Dick on over 50 per cent shooting from the field, Star simply outclassed Inter and led for the majority of the game, at times by as much as 25 points. 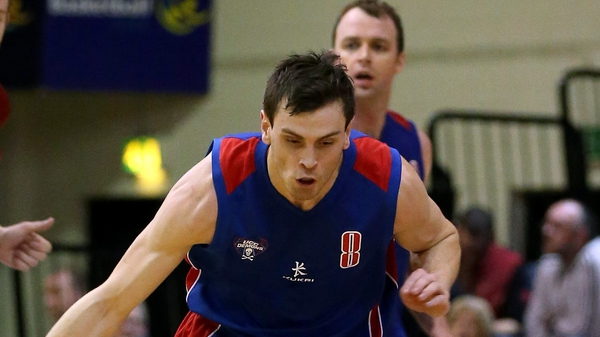